The San Francisco 49ers signed veteran receiver Mohamed Sanu on Saturday. Where else can they build their roster in free agency before the 2021 NFL Draft? 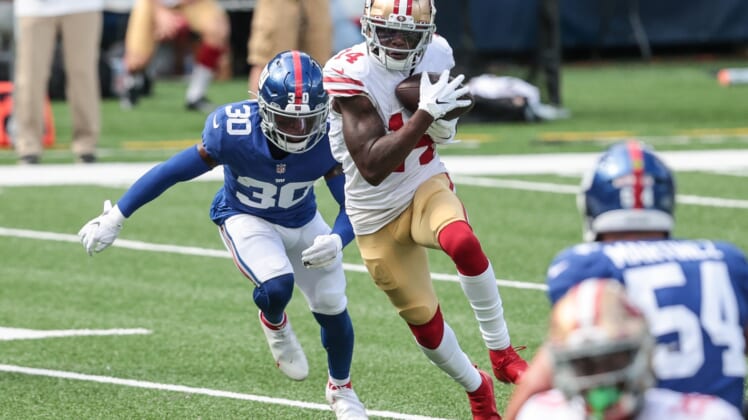 The San Francisco 49ers are bringing back veteran wide receiver Mohamed Sanu on a one-year contract, according to his agent Mike McCartney.

Only one day after making an epic trade to move up to third overall in the 2021 NFL Draft with an eye toward a quarterback of the future, 49ers general manager John Lynch went out to get a mentor for San Francisco’s young receiving corps.

Sanu played in three games for the Niners last season before being released. He finished up 2020 with the Detroit Lions, but he’s back in the Bay Area amid an exciting new era. The 31-year-old is once again reunited with head coach Kyle Shanahan, who was the Atlanta Falcons’ offensive coordinator in 2016 when Sanu was there.

Because the 49ers have the salary cap means to do so, here’s another couple free agents they should consider pursuing as they prepare to build a roster around a cheap, young QB on a rookie contract.

San Francisco 49ers can boost d-line with a former rival

According to Over the Cap, San Francisco has a little over $19 million in salary cap space. However, their blockbuster draft trade means incumbent starting quarterback Jimmy Garoppolo will be out of town any day now. Trading or releasing Jimmy G will create an additional $23.6 million in cap room.

That’s plenty of money to go out and pursue veteran upgrades, because after all, the Niners traded away two additional first-round picks to get their replacement for Garoppolo. Lynch shouldn’t even hesitate to kick the tires on Reed as his top priority.

In addition to welcoming back stud edge-rusher Nick Bosa off a torn ACL, San Francisco can look forward to Javon Kinlaw entering his sophomore season poised to become one of the league’s premier interior defenders. Arik Armstead is versatile and athletic enough at his size to play defensive end, which means reed can slide in to the tackle spot next to Kinlaw.

Reed was a surprising cap casualty from the NFC West rival Seattle Seahawks. Imagine the opportunity he’d be presented with to stick it to Seattle twice per year. Plus, it’d be a nice bit of revenge after the Niners saw cornerback Ahkello Witherspoon join the Seahawks in free agency to leave a vacancy at the No. 2 cornerback spot opposite Jason Verrett.

Speaking of that other outside starting corner, Richard Sherman is an option to fill that role. However, the future Hall of Famer is soon to turn 33 and played in just five games this past year. It’s likely that Lynch and the front office want to go younger at the key position, especially with the talented but injury-plagued Verrett being relied upon heavily already.

Nelson celebrated his 28th birthday in January and fits the bill perfectly for what San Francisco should be looking for. The released Pittsburgh Steelers standout knows how to thrive in the most complex of defensive schemes, and in 2019, he finished as the sixth-best cornerback in Pro Football Focus’ player grades.

Some may argue Pittsburgh’s dynamic pass rush led by T.J. Watt and Bud Dupree was what yielded tons of success for Nelson. Well, even if that’s a potential negative, he’d at least have Bosa and Armstead to help him out — and getting someone like Reed, who had 6.5 sacks in 2020, would only help the cause.

The combination of a loaded defensive front, a returning safety corps of Jimmie Ward and Jaquiski Tartt, and the pairing of Verrett and Nelson would position the 49ers ideally to continue thriving on defense despite the loss of coordinator Robert Saleh, who’s now the head coach of the New York Jets.