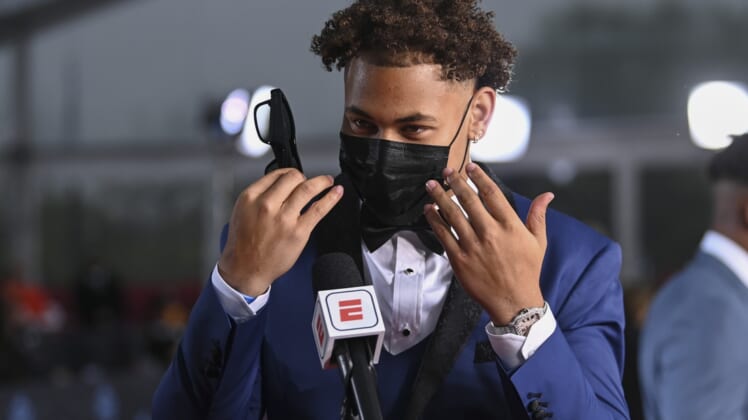 “You know how it is when you meet someone who kind of has ‘it,'” Lynch said in a joint interview with Shanahan on ESPN late Thursday. “From the first experience we had with him via Zoom to the pro day where we got to go be around him a little bit, it just got better and better.

“I’ll never forget the night Kyle called me up on a Sunday night about 9 o’clock and said, ‘I’m getting kind of obsessed with this guy. You’ve got to watch him.”

Lance was chosen third in the 2021 NFL Draft, following fellow quarterbacks Trevor Lawrence (Jaguars) and Zach Wilson (Jets) off the board.

Shanahan said he knew Lance would be the guy in January. He didn’t know if the 49ers would be able to get him holding the No. 12 pick.

By the time Lynch caught up with film study, they were in lockstep on which quarterback fit the 49ers best. The GM made a trade with the Miami Dolphins to acquire the No. 3 pick in March with eyes firmly locked on Lance.

But Lynch and Shanahan didn’t even share their preference with scouts and assistant coaches. They wanted all evaluations to be independent of any influence of knowing the bosses wanted the small-school product.

And as pundits pointed in other directions, namely at Alabama’s Mac Jones and Ohio State’s Justin Fields, it was the North Dakota State quarterback with limited game reps the 49ers felt was the only option.

“All of that stuff is a concern,” Shanahan said. “The people who are the best in the world at (drafting) are still taking their best guess.”

Shanahan said the Lance pick isn’t an exact science and no pick can be. However, he said the team was very thorough in watching film of Lance, which helped override any worry about the number of games and reps he had in college.

Lance went 17-0 in college — the same number of starts Jones had with the Crimson Tide — but his 318 college pass attempts are the lowest total for a first-round pick in the last 40 years.

He’ll enter the offseason program as a backup to Jimmy Garoppolo.

Lynch said when Lance “is ready, he’s ready” but deferred to Shanahan and the coaching staff on the pecking order at quarterback.

“With Jimmy, if he’s healthy, he’s working his butt off. It’s going to be very hard to come in and beat Jimmy out,” Shanahan said. “Jimmy’s our quarterback right now. The day it looks like Trey can compete with him and he’s ready to go, we’ll see that and we won’t hesitate. We have a very good backup now, he comes in at No. 2.”