Are the San Francisco 49ers Going to Rebuild or Reload?

In the sports word, the term rebuild indicates that a team is going to forfeit short-term success for long-term contention. On the other hand, the term reload means that said team is undergoing a roster turnover in order to compete both short term and into the future.

By now it’s not a secret that things are going to be changing for the San Francisco 49ers this upcoming offseason. From likely having to find a coach to replace Jim Harbaugh to making some difficult decisions about some high-priced veterans, this will dictate the future of a franchise that had made it to three consecutive NFC Championship games before falling flat this season.

There are a few different factors to look at here, so let’s take a gander.

Veterans Potentially on the Verge of Being Released

Courtesy of Getty Images: San Francisco has a decision to make with Patrick Willis at season’s end.

After releasing Ray McDonald earlier in the week, San Francisco is slated to be about $6 million under the cap after the season ends. That’s based off a projected $140 million cap. This means that general manager Trent Baalke will have some tough decisions to make.

Linebacker Ahmad Brooks won’t be one of those tough decisions. He has been benched this season for missing a team meeting and actually pulled himself from an outing because the 49ers wanted to go with a younger pass-rush option in Aaron Lynch. Despite his importance to the team in the past, Brooks is set to count about $9.7 million under the cap. And with a dead-money hit of just $3 million, San Francisco can save nearly $7 million by releasing Brooks.

That’s pretty much where the easy decisions end.

Future Hall of Famer Patrick Willis will count $8.3 million against cap with just a $800 thousand dead money hit. This means San Francisco can save a whole lot of money by trading or releasing the veteran linebacker. It may be hard for some fans in San Francisco to understand why the team could potentially part ways with Willis, but the finances make this a possibility. It’s also important to note that Willis’ game has regressed a tad and he’s missed time due to injuries in each of the past two seasons. 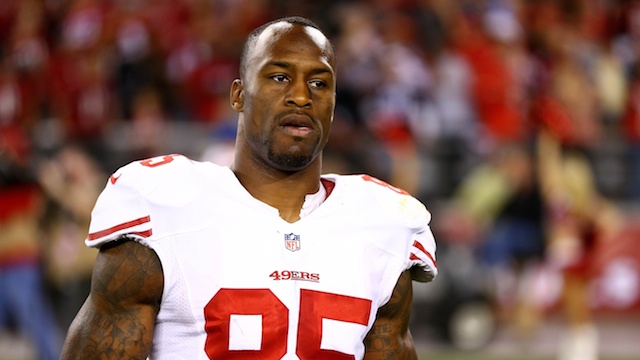 Courtesy of Rant Sports: Vernon Davis’ lack of production coupled with a high price tag may lead to his departure from the 49ers.

Another player to look at as a potential release candidate is tight end Vernon Davis, who has played uninspired football this season. Once known as one of the better blocking tight ends in the NFL, it appears that Davis’ effort is lacking in that category. He’s also put up just 25 receptions for 236 yards on the season. Davis will count $7 million against the cap in the final year of his deal. He also held out throughout the offseason angling for a new deal. With a dead money hit of over $4 million, San Francisco may not release Davis outright. But it could potentially find a trade partner for him.

Other veterans potentially on the way out include: Stevie Johnson, Phil Dawson and Craig Dahl. Those three would save San Francisco about $10 million against the cap. 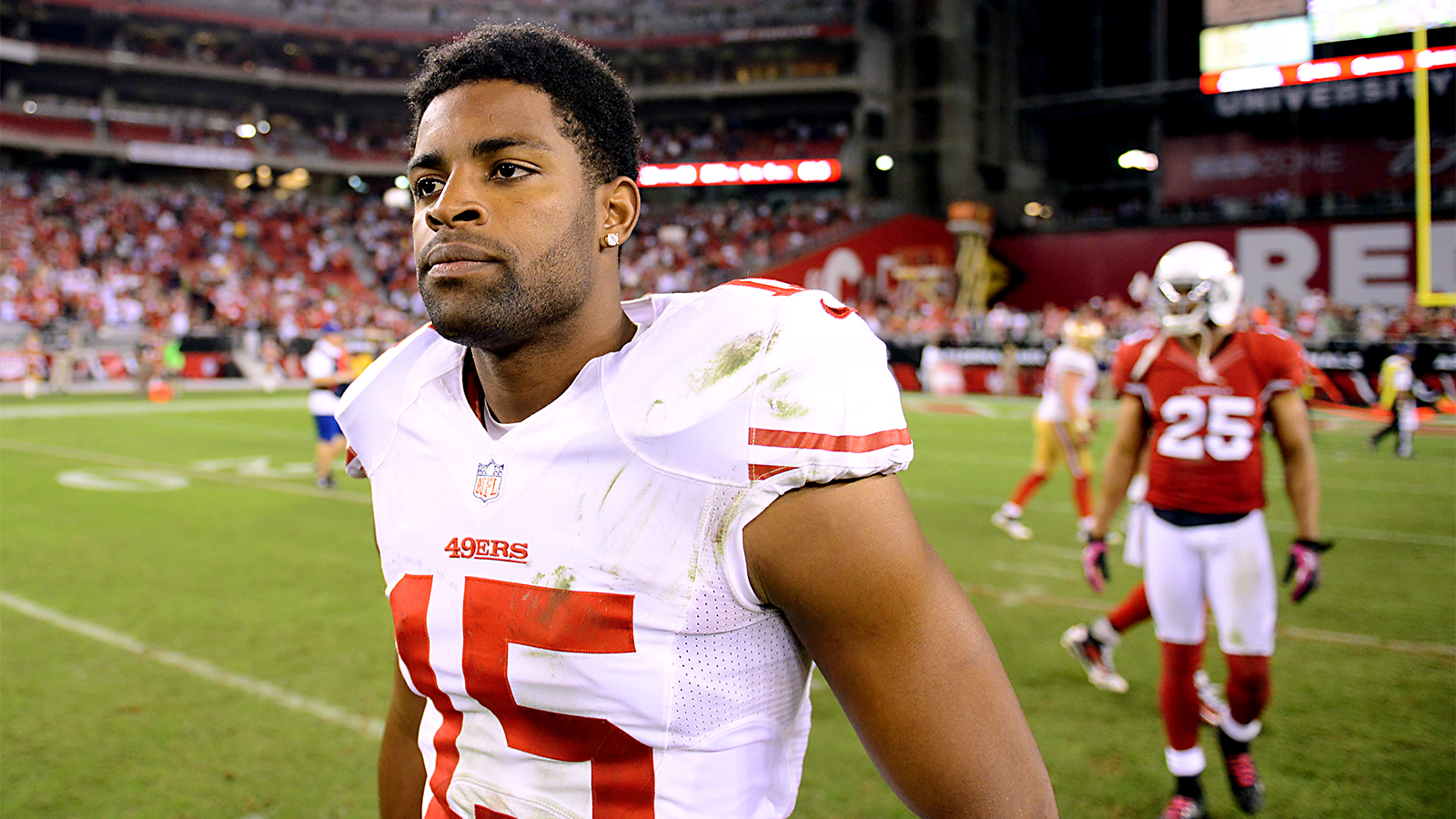 Courtesy of USA Today: It’s almost a foregone conclusion that Crabtree won’t be back in 2015.

Among the biggest free agents on the 49ers roster is Michael Crabtree, who has underwhelmed a great deal this season. He’s also seemingly angling for a huge pay increase, which is something San Francisco likely won’t be willing to give him. With a great free-agent class expected at the wide receiver position, I fully expect San Francisco to move on from its former first-round pick.

Running back Frank Gore is San Francisco. He’s been with the team through thick and thin, but the time has likely come for the team to move on from him. Gore has put up just over 800 yards this season and seems to have lost a step. Considering that the running back position isn’t anywhere near as valued today as it was in earlier eras, there’s no real FOOTBALL reason for San Francisco to retain Gore.

Mike Iupati is yet another valuable member of the 49ers roster that likely won’t return next year. His game has regressed from an All-Pro 2012 campaign, and he’s likely going to strike it rich on the open market. I don’t envision a scenario where San Francisco gets into a bidding war for Iupati’s services.

Chris Culliver and Perrish Cox are two free agents I expect San Francisco to attempt to re-sign. Culliver has played tremendous football when healthy, and has the talent to be a starter moving forward. His injury issues, which started up last season with a torn ACL, could make Culliver affordable for San Francisco. As it relates to Cox, he’s obviously seen a major emergence since legal troubles forced him from Denver a couple years back. The former second-round pick is considered one of the better cover guys on the team. 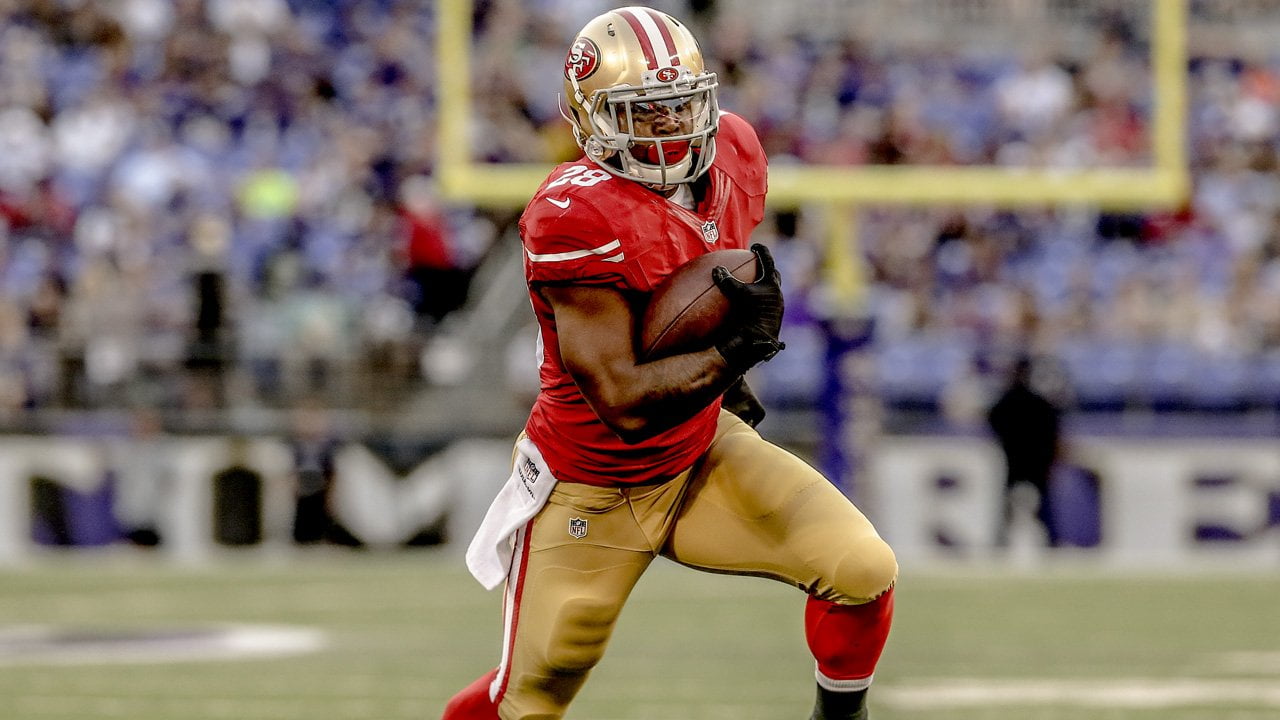 Courtesy of 49ers.com: San Francisco ground attack will be in good hands with Carlos Hyde.

Looking at what we wrote above, some may draw the conclusion that San Francisco is prepared to begin a lengthy rebuilding process. That couldn’t be further from the truth.

For nearly every single potential exit we listed above, San Francisco has a younger and cheaper alternative.

Rookie second-round pick Carlos Hyde has been dynamic when he’s seen the field this season. He’s averaging over 4.5 yards per touch this season and has everything you want in an every-down running back in the NFL. Hyde was considered a question mark when it came to pass protection when he entered the league, but that’s a craft he’s been working on a great deal. San Francisco won’t see any regression from the running back position with Hyde replacing Gore.

As it relates to the guard position, San Francisco drafted a highly-touted interior lineman in the mid rounds of the 2014 NFL draft. Brandon Thomas was slated to be a second-round pick before tearing his ACL during the draft process. Depending on how the Clemson product rebounds from that injury, he could be a Day 1 starter as a replacement for Iupati. It’s these types of forward-thinking moves that has San Francisco in a decent situation.

Neither Bruce Ellington or Quinton Patton have proven that they can be consistent contributors on offense. But both have the talent to succeed with some seasoning. If San Francisco does end up losing Crabtree and parting ways with Stevie Johnson, one of these two will likely have to step up. With that said, we can expect Baalke and Co. to hit the free agent market hard at this position. Pure conjecture, but Randall Cobb seems to be a nice fit. 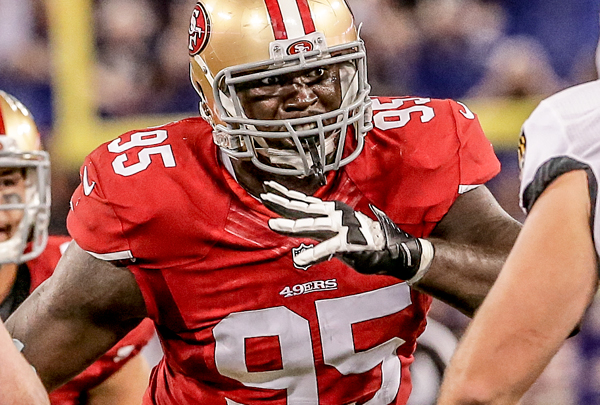 Courtesy of 49ers.com: Tank Carradine is just one of many young 49ers ready to take on a larger role.

On the defensive side of the ball, San Francisco has a hidden little gem prepared to replace Ray McDonald in the form of Tank Carradine, a second-round pick from Florida State back in 2013. Prior to tearing his ACL during his final game at Florida State, Tank was considered a legitimate top-10 prospect. He shined big time during the preseason before taking a step back in the rotation once the regular season got going. But as with most young 49ers defenders, Carradine has shown flashes of brilliance this season.

Replacing Ahmad Brooks will be a freak of nature, otherwise known as Aaron Lynch. The former Notre Dame and South Florida standout entered the NFL with a ton of off-field questions. However, he’s been downright dominating in the limited playing time he’s seen opposite Aldon Smith at outside linebacker. In reality, the idea of San Francisco teaming Lynch up with Smith has to be scary to opposing NFC West offenses.

Yet another great rookie performer, linebacker Chris Borland did an amazing job filling in for Patrick Willis before going down with a season-ending injury himself last week against the Seattle Seahawks. He tallied 107 tackles, two interceptions and five passes defended in 11 games this year. Those are some amazing stats. And more than that, Borland showed himself to be a standout difference maker on a defense riddled with injuries. While he wouldn’t be able to replace Patrick Willis’ leadership, there’s a decent chance San Francisco goes with the young option here.

In the defensive secondary, rookie fourth-round pick Dontae Johnson has been among the biggest surprises in the league. While he’s started only one game, the North Carolina State product has shown that he will be a starter in the NFL for a long time. In the mold of the lengthier cornerbacks we see in Seattle, the 6’2″ cornerback could end up being one of the biggest surprises of the 2014 draft. 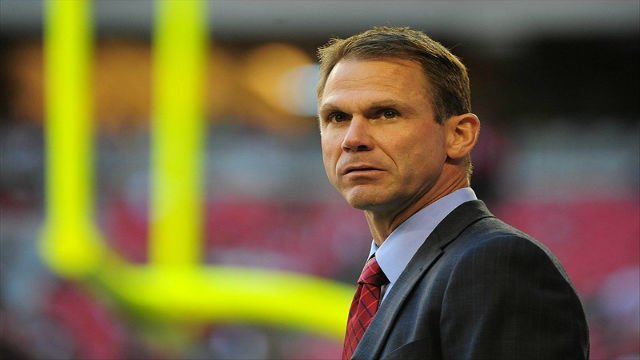 Courtesy of USA Today: Trent Baalke has a plan, and the 49ers are entrusting him with it.

Based on the young talent that San Francisco possesses on its roster, we can’t draw the conclusion that this team is going into rebuild mode. As we mentioned above, Baalke and Co. have done a good job preparing for imminent losses of veteran players. For nearly every single individual that might depart in the offseason, there is a stud replacement on the roster.

Some many indicate that San Francisco will have cap issues this upcoming offseason. But to be honest, that’s too simple minded. The 49ers can save a whole heck of a lot of money by getting rid of some of the veterans we previously mentioned. In fact, San Francisco will have the cash to actually hit the free agent market if it should decide to.

That’s where this really gets interesting. With young replacements at key positions, San Francisco can target a couple players at other positions of need and enter the 2015 campaign with Super Bowl aspirations.

The short of it. While we may be down on the 49ers after what has been a disastrous season on all fronts, this team isn’t going to go quietly into the night. It has the building blocks to remain contenders for the long haul. It’s now all about the front office making the necessary moves to overcome this horrendous 12-month stretch.