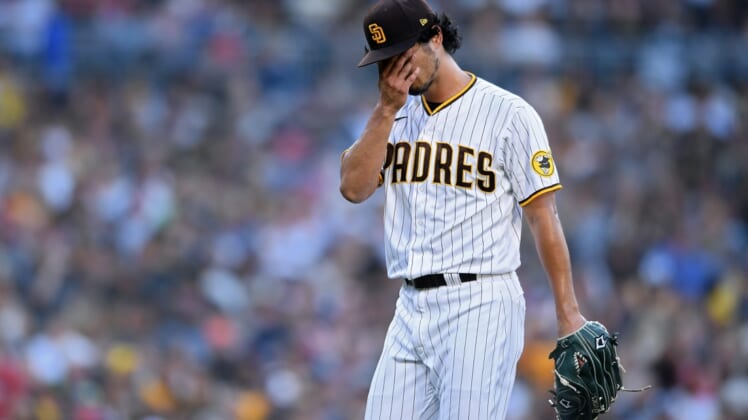 Jul 8, 2021; San Diego, California, USA; San Diego Padres starting pitcher Yu Darvish (11) wipes his face as he walks to the dugout after the last out of the top of the fourth inning at Petco Park. Mandatory Credit: Orlando Ramirez-USA TODAY Sports

The move is retroactive to Friday after Darvish’s most recent appearance. Counting the four-day midseason break, Darvish can technically avoid missing a start despite the injury.

San Diego recalled right-hander Nabil Crismatt from Triple-A El Paso. Crismatt, 26, is 2-1 with a 3.55 ERA in 23 appearances with the Padres this season.

Darvish, 34, left his start Thursday against the Washington Nationals after three innings because of back and hip tightness. He gave up a season-high six runs while matching a season high with eight hits allowed.

Darvish joins fellow Padres starters Blake Snell and Dinelson Lamet on the IL. Sunday’s starter, Ryan Weathers, left in the third inning with a knee injury after colliding with a baserunner.

The five-time All-Star (including this season) finished third in the 2012 American League rookie-of-the-year voting and was runner-up for the National League Cy Young Award last season with the Cubs, when he went 8-3 with a 2.01 ERA in 12 starts.