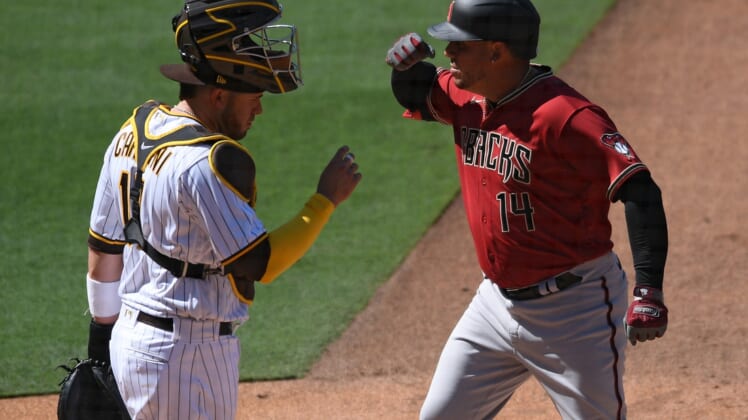 Jake Cronenworth tripled leading off the bottom of the seventh and scored on a sacrifice fly to snap a tie and give the San Diego Padres an 8-7 victory Thursday over the Arizona Diamondbacks in the season-opener at home.

Reliever Emilio Pagan (1-0) pitched a perfect seventh to earn the win and veteran Mark Melancon picked up the save in his Padres debut. Alex Young (0-1), who gave up a game-tying hit in the sixth before allowing the winning run an inning later, took the loss.

The Padres tied the game in the sixth when Eric Hosmer singled home Tucupita Marcano — who drew a pinch-hit walk in his Major League debut — for his third RBI of the game. Hosmer was 3-for-4 with a double and a homer.

The Diamondbacks erased a 6-1 deficit and took the lead with a six-run fifth that was highlighted by four homers.

Ketel Marte, who had four hits, started the scoring with a one-out homer to center off Yu Darvish, who then issued his only walk to Christian Walker. After David Peralta popped out, Asdrubal Cabrera homered, ending Darvish’s debut with the Padres.

Left-hander Tim Hill seemingly got out of the inning by getting Eduardo Escobar to ground to Fernando Tatis Jr. But the shortstop’s throw to first drew Hosmer off the bag. Pinch-hitter Tim Locastro followed with a game-tying homer and catcher Stephen Vogt connected on the game’s second set of back-to-back homers to put the Diamondbacks ahead, 7-6.

The Padres built a 6-1 lead against Madison Bumgarner in four innings. Catcher Victor Caratini became the first Padres catcher since Terry Kennedy in 1983 to drive in three runs in the season opener with a pair of singles, Hosmer and Wil Myers hit back-to-back homers in the third and Hosmer had an RBI double in the fourth.

Padres relievers retired nine of the 10 Diamondbacks they faced. Drew Pomeranz followed Pagan and had three strikeouts while allowing a single. Melancon retired the middle of the Arizona order in a perfect ninth.