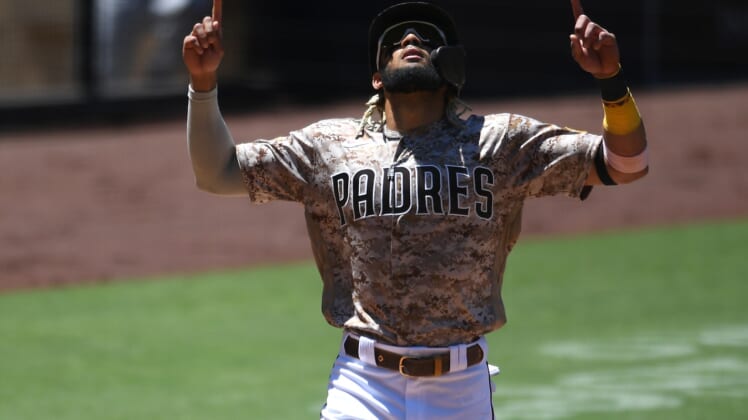 San Diego Padres shortstop Fernando Tatís Jr. has taken the leap from promising rookie to MLB star during the 2020 season. With the Padres now poised to contend for years to come, they could soon be looking to reward Tatís Jr. with a contract extension.

The 21-year-old shortstop made his MLB debut in 2019 and is quickly proving the prospect hype was warranted as he becomes one of the best players in baseball.

Tatís Jr. is only in his second MLB season and won’t be eligible for free agency until 2025. While the Padres might have him under contract control for the next five seasons, they are seemingly already determined to keep him in San Diego even longer.

In an interview with ZDeportes, via Héctor Gómez, Tatís Jr’s father shared some insight on his son’s potential future in San Diego. While Fernando Tatís, a former MLB player, wouldn’t get into specifics, he indicated a long-term contract could be on the horizon.

We’ve seen MLB teams make it a priority in recent years to sign their young talent to long-term extensions years before they hit free agency. Doing so allows the club to avoid potential arbitration battles in future years and often offers contracts that stretch past when the player could hit free agency.

While Tatís Jr. might see more long-term benefits by playing out under his current contract and going through arbitration, signing a contract extension now guarantees him money for his future.

Fernando Tatis Jr’s stats prove he is an MLB star

Even as a 20-year-old rookie, we saw glimpses of greatness from Tatís Jr. He recorded a .969 OPS with 22 home runs and 16 stolen bases in only 84 games. After recovering from a season-ending back injury, San Diego’s phenom is taking it to a new level this year.

Across 16 games this season, Tatīs Jr. is lighting up MLB pitchers and stunning fans watching from home. He is tied for the MLB lead in home runs (eight), ranks second in RBIs (18) and owns an MVP-caliber 1.226 OPS.

As Tatīs Jr. thrives at the plate, routinely crushing bombs out of the leadoff spot, the Padres are soaring in our latest MLB power rankings. Everything is coming together for this club and there’s even more talent on the way. If San Diego can sign their star to an extension, it might not be long before they are a World Series contender.