San Antonio Spurs get off to fast start, roll over shorthanded the Indiana Pacers 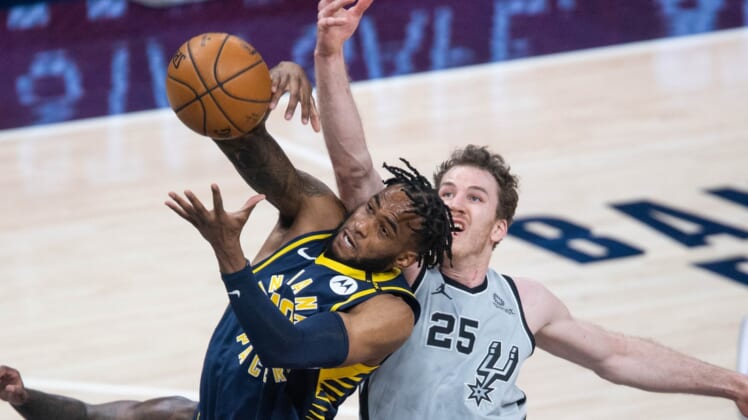 Derrick White poured in 25 points, 16 of them in the first quarter, and all five San Antonio starters scored in double figures as the Spurs rolled to a 109-94 victory over the short-handed Indiana Pacers on Monday in Indianapolis.

The game was the second of a road-home back-to-back for the Pacers, who lost in Atlanta on Sunday afternoon.

The Spurs led by 15 points after one quarter and never let off the gas, pushing the margin to as many as 23 in the fourth quarter while dominating throughout. San Antonio has won two straight on the road and are now 16-10 away from the Alamo City this season.

DeMar DeRozan added 18 points for the Spurs. Jakob Poeltl scored 16 points before fouling out with 7:26 to play, Keldon Johnson hit for 14 and Dejounte Murray finished with 11 points while Drew Eubanks pulled down a game-high 13 rebounds for San Antonio.

Caris LeVert and Malcolm Brogdon scored 18 points each to lead the Pacers, with Oshae Brissett adding 13. The loss was the third straight and fourth in the past five games for Indiana.

San Antonio shook off an early surge by the Pacers, rallied to tie the game at 17 at the 5:24 mark and then ran off the 19 of the final 25 points of the period to build a 36-21 advantage at the end of the first. The Spurs went up by as many as 17 points before settling for a 55-44 lead at halftime.

White paced all scorers with those 16 first-quarter points while DeRozan added 10 for the Spurs in the first half.

LeVert, who missed his first six shots, finished the half with 10 points of 5 of 12 shooting. Brogdon also had 10 points for Indiana at the break.

San Antonio pushed its lead to as many as 21 points on three separate occasions in the third quarter before the Pacers put together a mini-run and pulled to within 82-66 heading into the final 12 minutes.

The Pacers played without two-thirds of their starting frontcourt, with Myles Turner (right toe) and Domantas Sabonis (back) out with injuries.