Howell, a junior who’s the preseason Player of the Year in the Atlantic Coast Conference, made a career-long 62-yard touchdown run in the waning seconds of the third quarter so he became the game’s leading rusher as well.

Georgia State, which was blown out at home by Army in its first game, reached the North Carolina 32-yard line on its next drive, but failed to convert a fourth-and-2.

The Tar Heels responded with Howell’s 57-yard touchdown strike to Antoine Green. So it took slightly more than seven minutes for North Carolina to eclipse its point total from its entire opening game — a 17-10 loss at Virginia Tech.

The Panthers’ Dontae Wilson recovered a Howell fumble, giving Georgia State the ball at the North Carolina 19. Though they didn’t advance from there, the Panthers got on the scoreboard with Noel Ruiz’s 37-yard field goal. 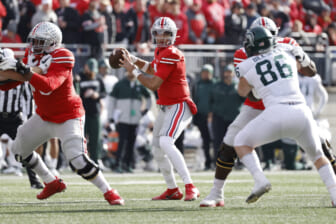 It was 21-3 after Howell’s 30-yard pass play to Emery Simmons early in the second quarter.

Brown scored on a 4-yard run for Georgia State on a drive that included 17 plays and consumed 7:30.

North Carolina’s British Brooks scored on a 1-yard run for the first points of the second half and Ty Chandler, a transfer from Tennessee, added a 2-yard TD run later in the third quarter.