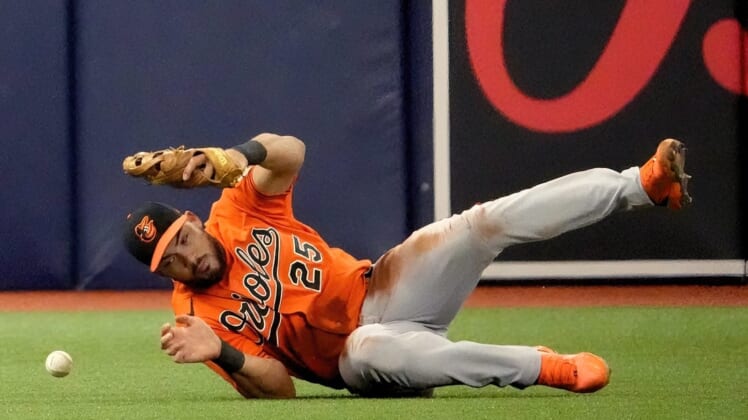 Ryan Mountcastle singled home two runs in the top of the 11th inning as the Baltimore Orioles defeated the Tampa Bay Rays 6-4 on Saturday in St. Petersburg, Fla.

Mountcastle’s single drove in Jorge Mateo, who had tripled, and Cedric Mullins, who had walked.

Luke Bard (1-1) suffered the loss, while Jorge Lopez (4-5) picked up the win thanks to two innings of relief. He allowed one unearned run on one hit while striking out three.

In a dramatic finish that featured several lead changes, Mountcastle wasn’t the only one who came through in the clutch for the Orioles.

Adley Rutschman, who entered the game in the eighth inning, made two big plays with his bat and one with his arm after taking over behind the plate.

The rookie catcher drove home automatic runner Austin Hays with a sacrifice fly in the top of the 10th inning to give Baltimore a 4-3 lead. Hays had tagged up and advanced to third when first baseman Ji-Man Choi chased down Ramon Urias’ pop fly in foul territory before scoring on Rutschman’s fly ball.

The Rays made it 4-4 in their half of the 10th when Choi singled home Brandon Lowe.

Rutschman also hit a solo home run off Rays closer Jason Adam to tie the game 3-3 in the eighth inning. He also made a vital defensive play, throwing out Randy Arozarena at third base when the Rays attempted a double steal in the eighth.

Prior to that point, Tampa Bay had benefited from two runs scored by Brandon Lowe on wild pitches by Dean Kremer, and a solo homer from Arozarena.

The Rays had their winning streak snapped at five games. Baltimore had won 10 straight contests before traveling to St. Petersburg but lost on Friday. Sunday’s meeting will be a rubber match as both teams play their last game before the All-Star break.

Urias had two doubles to bring his season total to 12. He also drove in a run in the second to get the Orioles on the board.