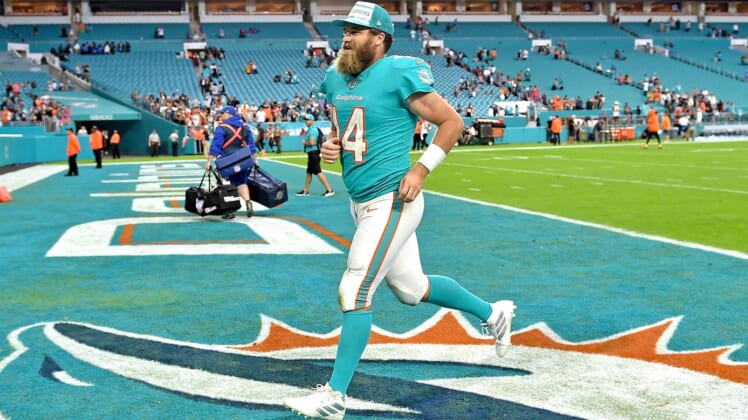 Fitzmagic is headed to the capital. No, we’re not talking about a politically-themed variety show. This promises to be much more fun. Ryan Fitzpatrick has reportedly agreed to sign a one-year, $10 million contract with the Washington Football Team.

According to ESPN’s Adam Schefter, the 38-year-old veteran quarterback will be the odds-on favorite to become Washington’s starting quarterback in 2021.

This just adds another layer to what has been a whirlwind career for Ryan Fitzpatrick after the then-St. Louis Rams selected him in the seventh round of the 2005 NFL Draft from Harvard.

Initially, Fitzpatrick looked to be nothing more than a journeyman backup. In fact, he nearly found himself out of the league after leading the NFL in interceptions with 23 as a member of the Buffalo Bills back in 2011. Since then, the veteran signal caller has morphed into a capable starter.

Over the course of the past six seasons, Fitzpatrick has thrown for 10,084 yards with 67 touchdowns against 47 interceptions while boasting a 17-20 record in 37 starts. Those are stopgap starter numbers right there.

A fan favorite around the NFL, Fitzpatrick will now take over for Ron Rivera’s squad after Washington released another hidden gem in Alex Smith earlier in the offseason. It promises to be a fun time for a Washington team that surprisingly won the NFC East with a 7-9 record last season.

As noted above, the Ivy League grad is a fan favorite. There was some talk of him potentially heading to the New England Patriots and playing for another mad genius in Bill Belichick.

Seeing Fitzpatrick do his thing in the nation’s capital could be the second-best option for objective fans around the football world. Some responded accordingly.