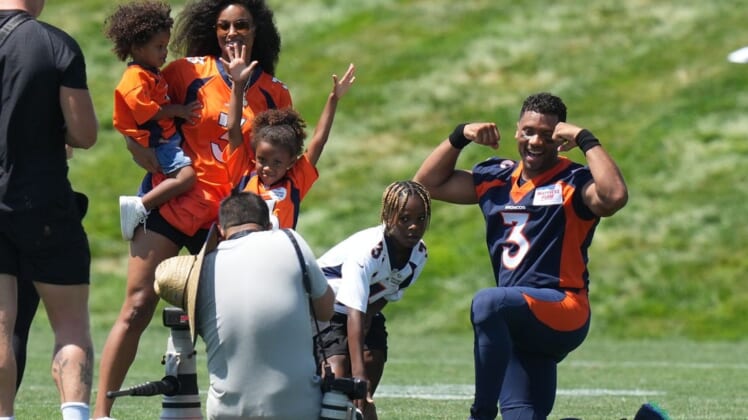 Russell Wilson is wearing a different uniform and participating in training camp at a new location.

And the new quarterback of the Denver Broncos is just fine with the fresh territory.

“I think newness is always great. Any time you go into something new, you have two ways of looking at it,” Wilson said after Wednesday’s training camp practice, his first in Centennial, Colo. “You can look at it with fear, nerves, and thinking, ‘What is this going to be? What is this going to mean?’ Or you can go own it and take care of it yourself and do it with a bunch of great guys.

“That’s what we are doing. We are all in this thing together. We are pumped and excited to do it and hopefully bring a championship to Denver again.”

Wilson 33, spent his first 10 NFL seasons with the Seattle Seahawks prior to March’s blockbuster deal in which he was traded to Denver for quarterback Drew Lock, tight end Noah Fant, defensive end Shelby Harris and five draft picks, including two first-rounders. The Broncos also received a fourth-round pick along with Wilson.

Wilson was a nine-time Pro Bowl selection with Seattle and guided the team to two Super Bowls — winning one, losing the other. He passed for franchise records of 37,059 yards and 292 touchdowns.

But there rumors following the 2020 season that Wilson was OK with leaving Seattle. Instead, the tension was smoothed over and he was back in 2021.

Yet the team’s performance went downhill with a 7-10 record, the first losing campaign of the Wilson era. Wilson was 6-8 when he played.

So the trade gives Wilson a new start and he is bullish on his new club despite the fact the Broncos have experienced five straight losing seasons and six without reaching the postseason.

“We got a championship kind of football team, and we are excited about that,” Wilson said. “The exciting part about that is now it’s time to just go show up and prove it.”

The optimism around the Broncos also includes having a new coach in Nathaniel Hackett, who worked with Aaron Rodgers the past three seasons during his time as offensive coordinator of the Green Bay Packers.

Hackett sees Wilson taking ownership of the offense on the field and is pleased with the early signs.

“It’s a new system, a new team, so everything is new,” Hackett said. “Just watching (Wilson’s) composure, his command of the huddle and working the system is what we’re looking for. We all know what he can do on the field when he gets going and when you simplify it down to a specific gameplan for that week. He’s doing great and only going to get better every day.”

Hackett said the exchange of information and beliefs have been strong between Wilson and the staff.

“We have great communication between all of us,” Hackett said. “I think that right now, we’re working on the foundation of everything and there is a system that we put in for a very specific reason as we go day-by-day. As we continually go and get a feel for what we’re good at and what he likes, that’s when we’ll start focusing on that. We’re constantly talking all the time about everything — new adjustments, new things that we can do — just like during a (game) week.”

Wilson worked with just one head coach during his time in Seattle in Pete Carroll.

But right off the bat, Wilson says he has a comfortable feel with Hackett.

“I think Coach Hackett and I, our bond is so strong,” Wilson said. “Our communication and his understanding of the game — the whys of the game, the history of the game. He’s a guru at it. I love studying the game like crazy, too.”