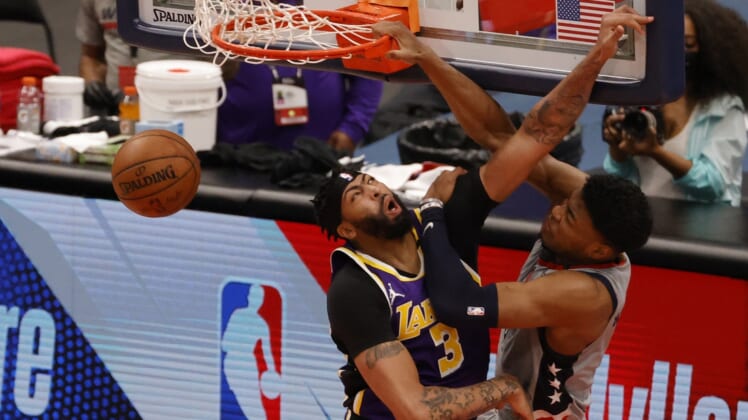 Westbrook finished with 18 points, 18 rebounds and 14 assists for his 30th triple-double of the season. Alex Len had 18 points and nine rebounds for Washington (28-34), which has won 11-of-13 and currently holds the final play-in spot in the Eastern Conference.

Anthony Davis led the Lakers (36-26) with 26 points. Andre Drummond had 17 points and 11 rebounds for the Lakers, who have lost four of five.

Los Angeles trailed by six at halftime and Kentavious Caldwell-Pope’s 3-pointer pulled the Lakers within 69-67 with 7:52 left in the third quarter. But Raul Neto’s 3-pointer kicked off a 17-2 Wizards run, capped by Beal’s 3-pointer and Len’s free throw, which made it 85-69. The Lakers went scoreless for just over four minutes.

Ish Smith’s 3-pointer pushed the lead to 90-74 and the margin was 13 after three quarters.

The Wizards increased the lead to 19 points early in the fourth quarter when Westbrook got a rebound and hit Smith ahead of the pack for a dunk with 9:11 remaining.

Davis hit a trey to get the Lakers within 102-89 midway through the fourth quarter and dunks by Ben McLemore and Davis made it 102-93 with 5:29 remaining.

Markieff Morris’ jumper gave the Lakers a 45-41 lead midway through the second quarter, but Lopez scored eight straight points to put the Wizards up by four.

Beal’s pull-up jumper gave the Wizards their biggest lead of the half, 57-49.

Beal, who finished 11-of-18 from the field, had 15 points in the first half, and Montrezl Harrell led the Lakers with 12.