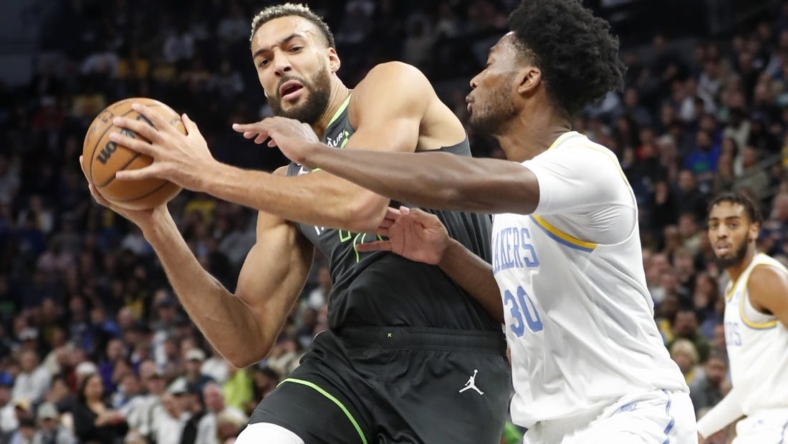 Rudy Gobert had 22 points and 21 rebounds for the Minnesota Timberwolves, who beat the Lakers 111-102 on Friday in Minneapolis as winless Los Angeles matched its worst start in 65 years.

Anthony Edwards scored 29 points and Karl-Anthony Towns had 21 points, eight rebounds and seven assists for Minnesota, which has won three of its past four games.

LeBron James amassed 28 points, seven rebounds and four steals while Russell Westbrook had 18 points and eight rebounds off the bench for the Lakers, who have lost their first five games. The only other time since the 1957-58 season that the Lakers started 0-5 was 2014-15.

Back in 1957-58, the Lakers were based in Minneapolis, and they dropped their first seven games.

Towns made a 22-footer to give Minnesota an 88-80 lead with 8:34 left, and his floater with 7:42 remaining kept it an eight-point advantage.

Edwards scored on a drive for a 94-84 lead with 5:42 left, the first double-digit lead for either team.

Towns made another 3-pointer with 3:16 to play for a 103-94 lead. The Lakers got back within five points on a 3-pointer by Austin Reaves with 2:25 to go, but Gobert came back with a dunk and then an offensive rebound and put-back for a 107-99 advantage with 57.6 seconds left.

The Lakers closed the second quarter on a 7-0 run to tie the score 52-52 heading into halftime.

Los Angeles took a one-point lead twice in the third quarter, but a 7-0 run pushed Minnesota’s lead back to 70-61 with 4:37 left in the third.

The Timberwolves were unable to extend their lead into double digits and Los Angeles cut the deficit back to 78-75 on two free throws by Wenyen Gabriel with 31.8 seconds left in the third.

Los Angeles was in position to cut the lead to one entering the fourth, but Westbrook missed two free throws with 1.6 seconds remaining.

Minnesota made seven of its first nine shot attempts to open a 19-10 lead, but Los Angeles cut the deficit to one with 1:18 left in the first quarter.

Lakers forward Anthony Davis missed the game due to lower back tightness.