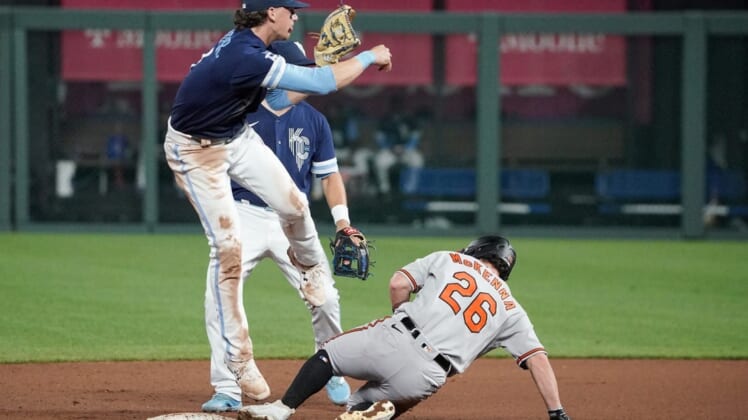 Kansas City has yet to win four consecutive games this season.

The Royals claimed their third straight win behind big nights from Salvador Perez, MJ Melendez and Jonathan Heasley on Friday night in the second game of a four-game series. Perez and Melendez each had a pair of hits, including a home run, and three RBIs as the Royals claimed an 8-1 victory. It marked the third straight game the Royals scored at least seven runs after achieving that total just eight times previously.

Wells is 1-0 with 1.08 ERA in four career appearances against the Royals. He has allowed just one run on six hits over 8 1/3 innings against Kansas City. The win came on May 9 in Baltimore, when the 6-foot-8 righty gave up just one run over six innings.

“I wouldn’t call it a milestone,” Wells said after the win. “Since Tommy John surgery, yeah, six innings and a quality start, I guess, is what you could consider the milestone. But the way I’m looking at it right now is just making sure that I go out there and I give my team a chance to win, and that’s exactly what happened.”

The six-inning outing was his career best to that point, though he matched it in a 10-0 victory at Boston May 30, when he allowed no runs on just two hits. He’s only walked nine batters in 47 2/3 innings, and four of those came in his first 5 2/3 innings of the season.

Wells’ journey to success has been a winding road. He had to endure the surgery, a pandemic-canceled minor-league season and a bullpen role to start his big-league career. He’s been on a pitch count (usually 60 to 75 pitches).

Lynch is 0-1 with a 4.91 ERA in one start against the Orioles. The left-hander gave up three runs (two earned) on four hits in 3 2/3 innings. He couldn’t complete four innings because of a high pitch-count (95 pitches). Part of the problem was walking four batters.

Lynch has lost two straight starts, giving up six runs in each start (a combined 9 2/3 innings). He walked five in the two games and gave up four home runs. In an 8-0 loss to Toronto on Monday, the Blue Jays hit three home runs.

After a rain delay of more than two hours, he was perfect through three innings. Then the wheels fell off. His first hit allowed was a two-run home run to Bo Bichette. He gave up another run in the fifth and then three more runs (all on home runs) in the sixth.

“I felt like I was attacking well,” Lynch said. “I was commanding my slider, my changeup really well. Using my fastball effectively. And just having confidence in my stuff.

“I really am trying to focus on getting to a point where I can go out there every single time and give us quality starts. I know I’m capable of that. It’s just going to take a little bit of looking into what’s going on and moving forward, and hopefully giving the team the best chance to win.”