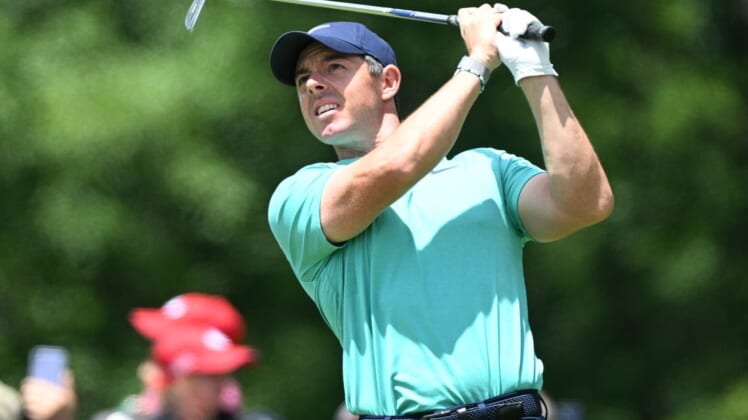 Wyndham Clark retained his one-stroke lead Friday at the Canadian Open in Toronto, but all eyes were on Rory McIlroy, who scored a pair of late birdies to sit in a group one stroke off the pace at the midpoint of the PGA Tournament.

McIlroy birdied the 15th and 17th holes Friday, picking up four strokes on Clark, who finished the day with an even-par 70 and remained 7-under par for the tournament with a two-day total of 133. McIlroy was joined at 134 by Americans Alex Smalley, Jim Knous and Keith Mitchell, and Matt Fitzpatrick of England.

“Overall it was a good score,” McIlroy said. “I scrambled well when I needed to. I didn’t really take advantage of how well I hit it off the tee. But overall I felt a couple under was a fair reflection of how the day went.”

McIlroy started the day three strokes back but slipped as far as five behind before his late charge injected the day with excitement as the golf world continues to curiously eye the tug of war between the PGA and the new LIV, which is holding its first event this weekend in London.

McIlroy, the defending champion and four-time major winner, overcame some struggles with his wedges and finished strong and Clark and Fitzpatrick came back to the field with their late-round play.

Fitzpatrick actually held a two-shot lead after he birdied the 11th, but his game fell apart with a double-bogey on 14 and he went bogey, bogey, bogey on the final three holes.

Clark, who breezed through a 63 in Thursday’s opening round as he — like Fitzpatrick — seeks his first PGA tour victory. Friday he parred his first seven holes before a birdie on No. 8. It was one of only three birdies he carded Friday, later bogeying 12, 15, and 16, which allowed the field to close in.

“Overall I played really good. I felt really confident with my game,” Clark said. “I had some little mishaps coming in, but other than that I played some great golf for 36 holes. If I do that again, I’ll have a great chance come Sunday.”

World No. 1 and FedExCup leader Scottie Scheffler is three strokes back at 4-under 136.