Rory McIlroy: ‘My record speaks for itself’ 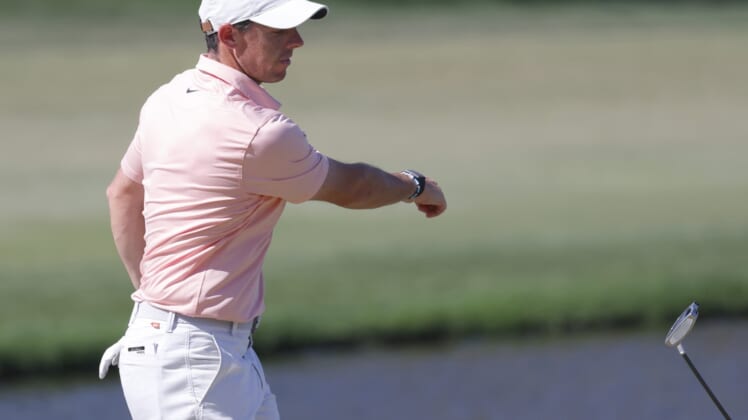 Mar 6, 2022; Orlando, Florida, USA; Rory McIlroy throws his putter toward the lake after missing a putt on the eighth green during the final round of the Arnold Palmer Invitational golf tournament. Mandatory Credit: Reinhold Matay-USA TODAY Sports

Rory McIlroy said he felt “punch drunk” after collapsing at the Arnold Palmer Invitational over the weekend. After a short reset, the Northern Ireland star is at TPC Sawgrass aiming for his second title at The Players Championship.

The four-time major champ was asked Tuesday if he wishes he were a “more boring” player, rather than continue his recent tendency to vacillate between brilliant performances and meltdowns.

“I mean, my record speaks for itself,” McIlroy said. “Yeah, you’re going to have — I mean, everyone has highs. Everyone has lows. But I’ve basically got a 50 percent top-10 record in my career, and that is a pretty high level of consistency.”

McIlroy opened with a 65 to lead the Arnold Palmer after one round. After an even-par 72 on Friday, he was among the many players to succumb to the tough playing conditions on the weekend. McIlroy posted consecutive rounds of 76 and tied for 13th.

“I feel punch drunk, to be honest,” he said Sunday, admitting frustration. “The weekend, it’s like crazy golf. You just don’t get rewarded for good shots.”

At Sawgrass, McIlroy said he treated Monday as a travel day and didn’t touch his clubs, and he feels recharged and more prepared for the next tournament.

McIlroy won The Players in 2019, part of a terrific season in which he also claimed his second Tour Championship. But he went all of 2020 and part of 2021 without winning again, before breaking his drought at the Wells Fargo Championship last May.

“Yes, OK, could I have won more tournaments? Of course I could have won more tournaments, but so could everyone,” McIlroy said. “Everyone could say that. Sometimes you need the lows to learn about what you need to do to go forward. I’ve always welcomed those low times because that’s where growth comes from. That’s where improvement comes from and reassessing where you are.”

McIlroy is looking for a better week at Sawgrass after he opened last year’s title defense with a first-round 79 and missed the cut.

“I don’t want to tempt fate,” he said Tuesday, “but there would have to be a drastic change in my game from now until Thursday for me to go and shoot 79 in the first round, but it is golf and you never know.”