And then there were three.

With Teddy Bridgewater and Blake Bortles set to start in Week 4 and in the immediate future, three of the top four quarterbacks selected in the 2014 NFL draft are now leading their teams. The only exception here being the biggest name of them all, Johnny Manziel.

Fortunately for those of you already undergoing Manziel-fatigue, this article will only focus on the three rookie quarterbacks who are currently starting for their teams and what to expect from them moving forward this season. 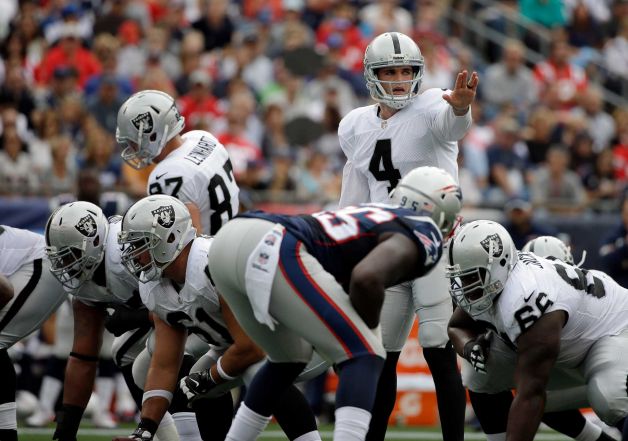 Courtesy of SF Gate: Carr needs help from coordinator Greg Olson to open up the offense.

Carr has been mighty impressive through three games. While still winless on the season, Oakland has a lot to look forward to with this rookie under center. The Fresno State product is completing 64 percent of his passes with three touchdowns and three interceptions. These might not be sexy numbers, but they are more than what we could have expected from a rookie quarterback starting from day one.

The issue here is that Oakland doesn’t possess the necessary talent on offense to help Carr progress as a quarterback on the field in 2014. Rod Streater suffered a foot fracture and will be lost for the remainder of the season. This leaves James Jones and Denarius Moore (who was a complete disaster on Sunday) as the only two Raiders receivers with previous success. Mychal Rivera is making strides at tight end, but he’s not where he needs to be as a safety valve for Carr.

Meanwhile at running back, Maurice Jones-Drew missed Sunday’s game against the New England Patriots and Darren McFadden has a history of injury concerns. This doesn’t even take into account an offensive line that needs to hold up better in pass protection if Carr is going to be able to open up the offense down the field.

Look for something to the tune of 3,400 passing yards with 20 touchdowns and 17 interceptions from Carr this season.

Have to say, Derek Carr continues to impress with pocket presence, huddle command, etc. I think the Raiders have something here.

These are all real concerns, but Carr’s ability to succeed moving forward this season may very well depend more on what he can do than what he has surrounding him on offense. If he can continue to progress like we have seen through the first three weeks, the 2014 campaign will be seen as a major success for Carr. And in reality, that’s more important than wins and losses for the Raiders. 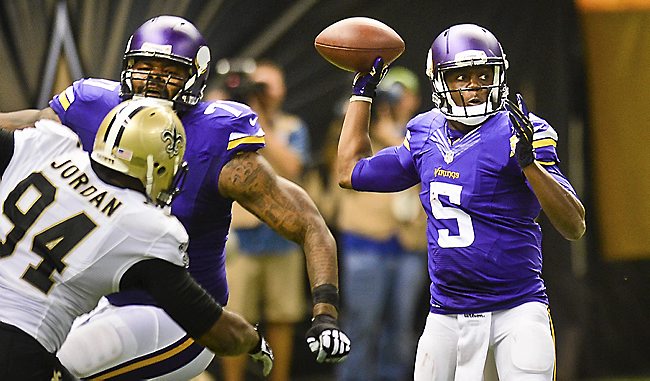 Courtesy of Twincities.com: Barring injury, Bridgewater is the Vikings starter to stay.

Teddy took over for an injured Matt Cassel against the New Orleans Saints on Sunday and will likely be the starter for the remainder of the season. Watching tape of this game, one thing became abundantly clear, Bridgewater offers a whole heck of a lot more from a multi dimensional standpoint than Cassel.

To a lesser extent than Carr in Oakland, this rookie doesn’t necessarily have the protection in front of him. Matt Kalil is coming off two solid seasons to begin his NFL career, but he has struggled a great deal through three games.

This has to be a major concern for the Vikings when it comes to Bridgewater’s progression moving forward on the season. Outside of that “minor” detail, Minnesota has the necessary weapons for the rookie to succeed. Kyle Rudolph is an impact receiving tight end and will provide a safety valve. Cordarrelle Patterson has that electric play-making ability, both in the run game and when lined up at receiver. And Greg Jennings is a solid veteran presence on the outside.

Despite the loss of Adrian Peterson for what will likely be the remainder of the season, Bridgewater has the talent to succeed, especially with a really good supporting cast at the skill positions.

Now prepared to start the final 13 games of the season, Bridgewater could put up some stellar stats with the supporting cast he possesses. I am looking at 3,000 passing yards, 18 touchdowns and 13 interceptions from the rookie.

Courtesy of USA Today: The Bortles era got off to an exciting start Sunday.

The Jaguars did their fans and the rest of the team a disservice by starting the season with Chad Henne under center. He’s just not a starting quarterback in the NFL, and Blake Bortles performed at a much higher level during training camp and the preseason.

Now that this mistake is behind Jacksonville and it’s 0-3 on the season, Bortles will get the start next week against the San Diego Chargers. He might have made a few silly rookie mistakes against the Indianapolis Colts on Sunday, but that’s to be expected. What Bortles does bring to the table is an unparalleled upside in Jacksonville, something this franchise has never really possessed at quarterback.

It’s not a coincidence that Henne went down 16 times in 10 quarters before being benched for Bortles. The veteran may not have had the greatest pass protection in front of him, but he was holding on to the ball far too long. In a second half that saw him go down just one time, Bortles completed 14-of-24 passes for 223 yards with two scores and two touchdowns. To put that into perspective, Henne had put up 226 passing yards in his previous six quarters of play.

More than that, Bortles has the ability to get the ball to youngsters Allen Robinson and Marqise Lee down the field. This should add another dimension to Jacksonville’s previously stagnant offense and open up the run game for Toby Gerhart.

Told a few #Chargers players Blake Bortles is starting for Jags next week. Lot of stunned expressions. Flowers on Bortles "he can do it all"

When opponents draw this conclusion simply based on tape that they have studied, you know full well a quarterback has the goods to get it done. It’s all about letting Bortles play his game and not holding him back like the Raiders seem to be doing with Derek Carr in Oakland. If that happens, it’s going to be an exciting final 13 games in Jacksonville.

Considering that Jacksonville will likely be playing catch-up a lot for the remainder of the season, Bortles is going to get the opportunity to put up some big numbers. Let’s project 3,400 passing yards, 23 touchdowns and 17 interceptions for the rookie here.