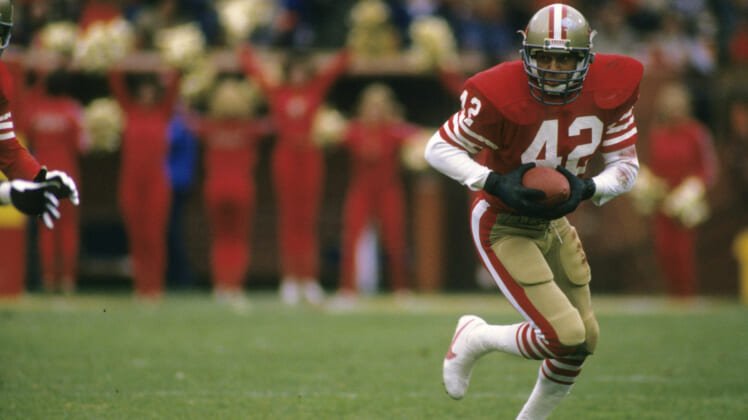 Hall of Fame cornerback Ronnie Lott (42) of the San Francisco 49ers runs with the football after intercepting a pass during the 49ers 21-10 victory over the New York Giants in the 1984 NFC Divisional Playoff Game on December 29, 1984 at Candlestick Park in San Francisco, California. (Photo by Rob Brown/Getty Images)

Many football fans consider Ronnie Lott the greatest safety to play in the NFL. It’s not a stretch given what we saw from the former USC standout after the San Francisco 49ers made him a top-10 pick in 1981.

Lott earned 10 Pro Bowl appearances, six First-Team All-Pro honors and won four Super Bowls as a member of the 49ers. He recorded 63 career interceptions and is among the most intimidating defenders in league history.

Rich Salgado was joined by Lott on a recent Big Daddy & Friends to discuss his view of safety play and who he deems to be the greatest player at that position in league history after him.

Salgado provided Lott with two obvious options in the GOAT safety debate: Hall of Famers Paul Krause and Ed Reed. Two great safeties who played in vastly different eras. While Lott was more than respectful of Krause, he couldn’t put the Vikings legend ahead of Reed.

“Paul Krause, and you think of his record and you think about the amount of interceptions that he had. Phenomenal. Just Phenomenal. The things that he did at that position and the defense that he was around,” Lott said. “They had an incredible line. They had great linebackers. They had it all. And he happens to be one of the guys that were a part of that. But he was phenomenal because he roamed the field and did so many incredible things.”

Obviously, Lott knows what he’s talking about when it comes to safety play. Krause finished his career with an NFL record 81 interceptions, a number that still stands today. He was a member of the team’s Purple People Eater defenses of the late 60s and early 70s, helping lead four defenses that ended up ranking No. 1 in total yards allowed.

Krause’s rookie season with the then-Washington Redskins back in 1964 included him leading the league with 12 interceptions. It would represent one of eight seasons with six-plus interceptions. To put this into perspective, Lott had four such seasons.

With that said, Lott made sure to note that he believes Ed Reed has a strong case as the GOAT safety.

“But when you say Ed Reed…arguably the greatest offensive-minded defensive player. Meaning, when he got a chance to catch the ball, he would score,” Lott said on Big Daddy & Friends. “He consistently forced the offense by putting pressure on them, knowing that any time he could get an interception, he would make them pay for it by scoring. To me, he’s one of the greatest ever. So, yeah, I would rank him a little bit higher (than Krause) because what he did in terms of putting points on the board.”

This is also hard to argue against. A first-round pick of the Ravens back in 2002, Reed led the league in interceptions three times (2004, 2008 and 2010). All said, Reed recorded 64 career interceptions and recorded nine defensive touchdowns in 12 seasons. That’s an absurd number right there.

Reed’s unique instincts led to an uncommon amount of trips to the end zone, allowing him to establish a singular, phenomenal NFL legacy.