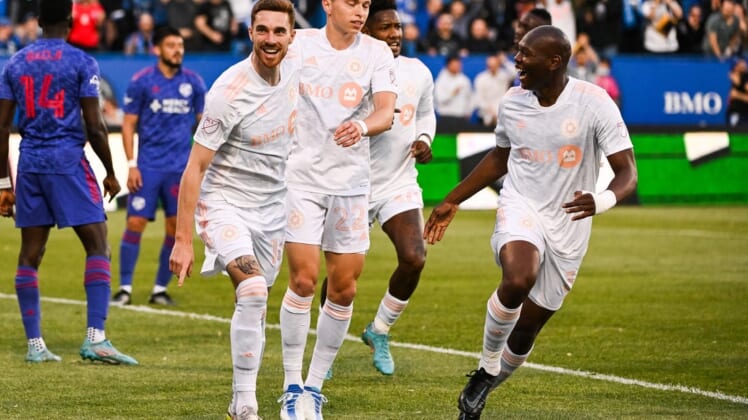 Romell Quioto scored twice to help CF Montreal hang on for a 4-3 win against the visiting FC Cincinnati on Saturday.

Alvaro Barreal had a chance for the visitors in the 11th minute when he was alone in front of Montreal goalkeeper Sebastian Breza but couldn’t get a shot off before Alistair Johnston came rushing in to kick the ball out of bounds.

Cincinnati made up for it a minute later off an ensuing corner from Barreal. Brandon Vazquez headed the corner to the front of the net where Junior Moreno directed it into the left side for a 1-0 lead in the 12th minute.

Joel Waterman tied it 1-1 in the 21st minute, also off a corner after a Quioto cross attempt was sent out of bounds by Nick Hagglund. Montreal defender Kamal Miller headed the corner from Joaquin Torres into the goal area and Waterman came down to the right side of the area, lifting the ball by goalkeeper Roman Celentano with a rising kick.

Quioto put Montreal ahead 2-1 in the fourth minute of first-half stoppage time. Celentano came out above the goal area but couldn’t control the ball as his defenders and Quioto drove toward him, and Quioto got his foot on the ball to send it into an open cage.

Mathieu Choiniere extended it to 3-1 in the 46th minute, striking quickly from the middle of the box into the top of the net off a feed from Kei Kamara.

Luciano Acosta sent a cross to Barreal above the goal area to narrow it to 3-2 in the 52nd minute. It’s the seventh straight game in which Acosta has factored into the scoring for Cincinnati.

Quioto made it 4-2 for Montreal when he converted on a penalty from the spot in the 59th minute, awarded after video review confirmed a handball by defender Nick Hagglund in the box.

Moreno cut it to 4-3 in the 63rd minute from just outside the box.