The NFL has seen unprecedented growth in terms of the economics of the game and overall popularity since Roger Goodell took over as commissioner of the league back in 2006.

The top league executive has seen his salary increase nearly 300 percent since he took over the job less than a decade ago. Meanwhile, NFL’s annual revenue total has increased 31.6 percent during the same span. 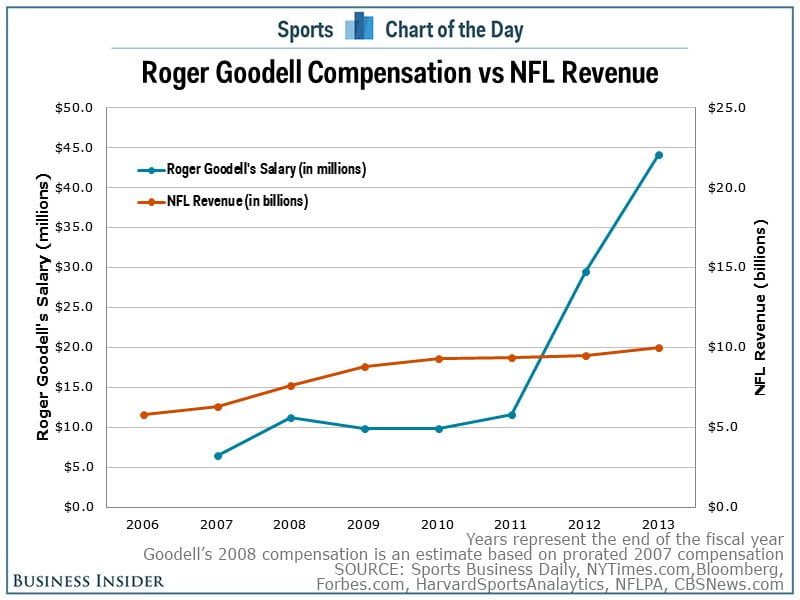 The chart above shows an increase in salary from just over $5 million in 2007 to nearly $30 million.

As Sports Business Daily points out, Goodell’s “compensation” is currently linked more to performance than in the past.

Most of the pay is in the form of a $22.3M bonus, a compensation structure that will continue into the future. Goodell’s pay is now more closely tied to his performance and not largely derived from a set salary.

Prior to the current scandal around the league, there weren’t many people questioning Goodell’s compensation. But that has changed, as he’s currently overseeing one of the darkest era’s in the modern history of the league.

If Goodell’s compensation is closely tied to performance, how can he justify a pay day over nearly $30 million in 2014? Even by Goodell’s standards, he’s failed to live up to the expectations of the job of commissioner in recent months.

It will be very interesting to see how this plays out from a financial aspect moving forward, but I highly doubt Goodell himself is willing to give back some of the money he’s earned during this inept time in his commissionership.

Maybe he should show goodwill and donate some of this money to women and children that have been directly impacted by violent acts committed by players under Goodell’s “leadership” in the NFL. Then again, we don’t exist in a world where that makes any sense.