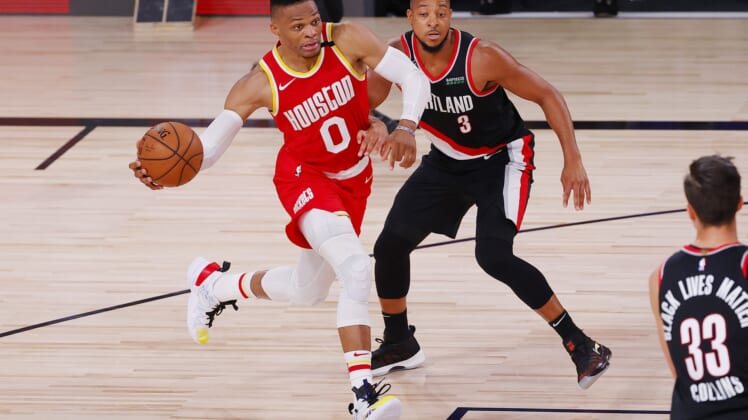 Aug 4, 2020; Lake Buena Vista, USA; Russell Westbrook #0 of the Houston Rockets drives to the basket against CJ McCollum #3 of the Portland Trail Blazers during the first half at The Arena at ESPN Wide World Of Sports Complex on August 04, 2020 in Lake Buena Vista, Florida. Mandatory Credit: Kevin C. Cox/Pool Photo via USA TODAY Sports

After big wins over the Dallas Mavericks and Milwaukee Bucks to resume their season, the Houston Rockets are coming off a disheartening loss to the Portland Trail Blazers.

There could be some more bad news in front of the championship contenders ahead of Thursday’s outing against the Los Angeles Lakers.

Russell Westbrook shows up on injury report ahead of Lakers game

On the surface, this doesn’t seem like a big deal. That’s until we realize lower-body injuries of this ilk can linger. With five more regular-season games to go before the start of the playoffs, the expectation is that Houston will take it slow with the former MVP.

Westbrook shot 5-of-14 from the field and scored 15 points in Houston’s loss to Portland on Tuesday. He’s shooting just 43% from the field in the three games since Houston restarted its season a Walt Disney World.

Rockets-Lakers game is a big one

Houston sits at 42-25 on the season and as the fifth seed in the Western Conference. By virtue of Utah’s win over the Memphis Grizzlies on Wednesday, the Rockets are a half game behind the Jazz for a top-four spot. It is also just a half game ahead of the Oklahoma City Thunder for the fifth seed.

It’s all about positioning themselves for the playoffs. In reality, the Rockets would like to either be the third seed (two games behind Denver) or the sixth seed in order to potentially avoid a second-round playoff matchup against these very same Lakers.

Despite all of this, it seems like Houston won’t rush Westbrook back on to the court. It needs him more for the playoffs than any of these five remaining regular-season games.

It’s clear that Houston has championship aspirations after an up-and-down performance prior to the season being suspended back on March 11. Making sure Russ is 100% ready to go for that title run is of paramount concern right now.