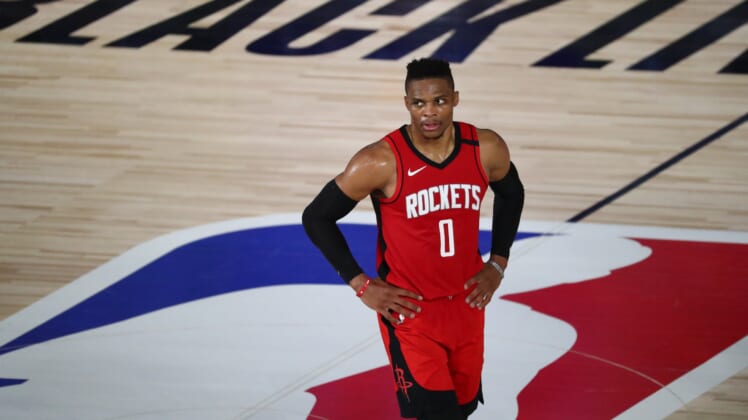 The Houston Rockets went into the NBA’s Orlando bubble with plenty of confidence they could contend for a championship. Unfortunately, with the playoffs set to resume, they will now be without star Russell Westbrook to begin their playoff push.

Westbrook, who appeared on the injury report on Aug. 5, was recently diagnosed with a strained right quadriceps, After undergoing further evaluation, the team learned they will be without the All-Star point guard for a while.

The Rockets, who planned to keep Westbrook out of the lineup for Friday’s game against the Philadelphia 76ers, hoped the 31-year-old could return for the start of the NBA Playoffs.

Even after being rested earlier this week, however, the situation didn’t improve. Now, according to The Houston Chronicle‘s Jonathan Feigen, Westbrook will miss the first few games of the team’s first-round playoff series.

The length of Westbrook’s absence will depend on his reaction to treatment and further rehabilitation. Unfortunately, there is concern that this could stretch into an even lengthier stay off the court.

Heading into their final game of the seeding stage, Houston holds the No. 5 seed in the conference. They are set to face the Oklahoma City Thunder in a best-of-seven series, which will begin next week.

Losing Westbrook would be a major blow for the Rockets, especially given how he has played this season. He averaged 27.2 points, 7.9 rebounds and seven assists per game during the regular season and dropped two 31-point games in the bubble.

With Westbrook sidelined, the Rockets will again be forced to rely on James Harden to carry the team in the playoffs. Facing a tough series against the Thunder, Houston now has an even bigger problem on its path to the NBA Finals.