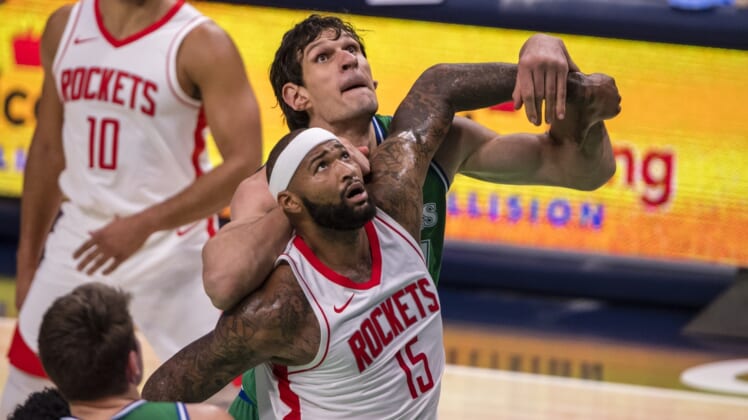 Eric Gordon and DeMarcus Cousins delivered their best performances of the season as the Houston Rockets claimed a wire-to-wire, 133-108 victory over the host Dallas Mavericks on Saturday at American Airlines Center.

Gordon scored a season-high 33 points on 6-for-9 3-point shooting while Cousins posted his second double-double with season bests in points (28) and rebounds (17). The Rockets, who led by as many as 26 points prior to extended garbage time, won both ends of a road back-to-back by following up a one-point win at Detroit Friday with exceptional shooting, including 16 3-pointers.

The Mavericks, victorious in San Antonio on Friday, were without five members of their rotation, four sidelined by health and safety protocols. Kristaps Porzingis (rest) also did not participate.

Despite the short-handed roster, the Mavericks sliced what was once a 16-point deficit to 74-71 with a 12-4 run to open the third quarter. The burst started with a three-point possession that closed the first half and concluded when Luka Doncic converted an 11-footer that forced a Houston timeout. But Cousins almost single-handedly stemmed the tide with a sudden display of perimeter sharpshooting, drilling a trio of 3s that pushed the Rockets to an 86-75 advantage.

The Rockets followed by delivering the knockout blow, closing the third with a 13-1 run over the final 2:45. David Nwaba, who scored 18 points off the bench, had seven points during the run.

Doncic paired 26 points with eight assists to pace the Mavericks. Tim Hardaway Jr. scored 15 points but missed 5 of 6 3s while Boban Marjanovic posted a double-double of 15 points and 12 rebounds. Dallas shot a woeful 5 of 25 from behind the arc and were outrebounded 52-36.

Cousins grabbed his 10th rebound at the 7:41 mark of the second quarter to notch his double-double. Gordon, who started 5 of 5 on 3s, helped the Rockets recapture a 16-point lead at 58-42 with a 3, and by the close of the first half, the Rockets were 10 of 23 from deep. Dallas stayed within striking distance by making 20 of 24 free throws prior to the break, but when Cousins answered the Mavericks’ rally with his red-hot shooting, Dallas failed to keep pace.