Rob Manfred partially right that bats are cause of HR boom

Balls are flying out of baseball stadiums at record rates in 2017. So, what’s the cause? The idea of a juiced ball has gotten a lot of attention but commissioner Rob Manfred is looking at another piece of equipment, the bats.

“One thing that we’re thinking about is bats,” Manfred said, via Craig Calcaterra of NBC Sports. “We’ve kind of taken for granted that bats aren’t different. We’re starting to look at the issue of bats.”

There’s no question that Manfred might be on to something. It’s hard to imagine that a piece of equipment as vital as the bat wouldn’t be contributing to a big home run spike. And make no mistake, we’ve seen a huge home run spike since the 2015 All-Star Game.

June of 2017 saw more home runs hit than any month in MLB history. Mind you, that’s a 30-day month. How many more bombs could have been hit with an extra day, or 15 extra games? Additionally, hitters are on track to obliterate the single season home run record set in 2000. Given that PED use is (presumably) nowhere near as rampant as it was during the Steroid Era, the power increase has to be equipment induced, right?

Well, like the balls, the bats are an unquestioned factor. But are either the greatest factor?

With such an increase, it’s impossible to point to one thing and say that it’s the cause of a power increase. But the primary factor may not be equipment related, at all.

No, it’s the kind of players that teams look at. 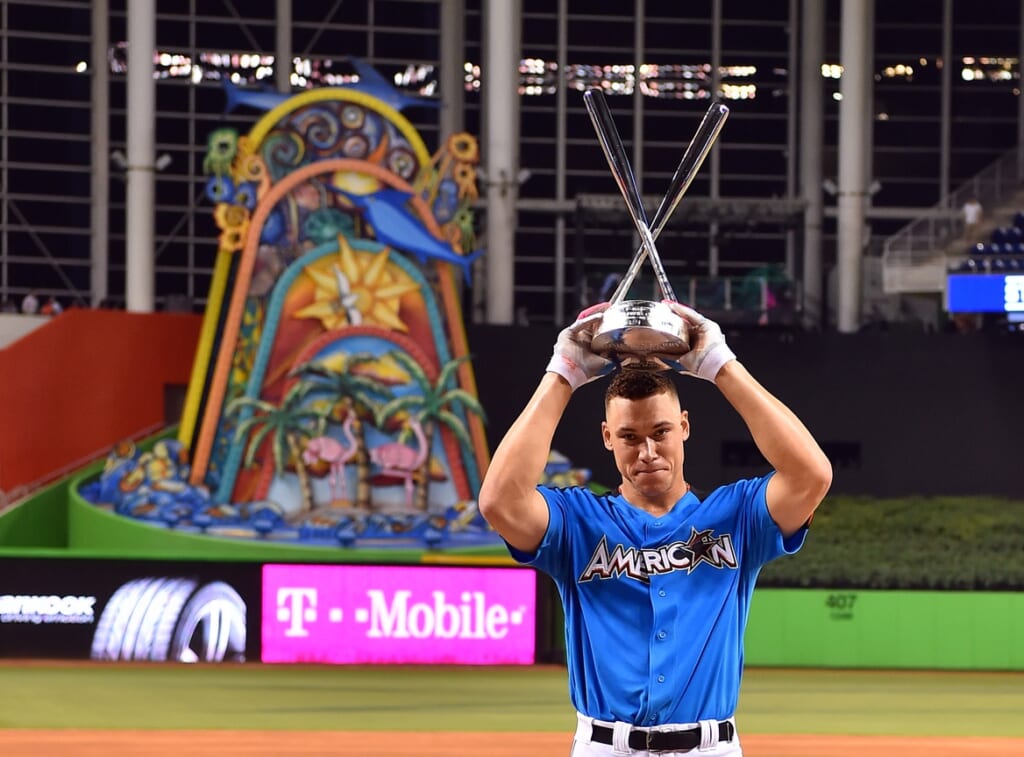 MLB has always had a few guys like Judge but now, the league is full of those kind of players. Not many are as good as Judge, but plenty have the same approach. This is a league-wide trend that teams are adopting. Hitters are up there trying to drive the ball out of the park, not to hit a single. When that happens, the strikeouts are an inherent risk. But of course, when capable hitters around the league are trying to hit home runs, there’s going to be an increase.

Of course, we can’t only look at the hitters that teams are targeting. The pitchers are vital here, as well. Really, to demonstrate this, we can look at the cause of one of the 2017 seasons most infamous moments, Bryce Harper and Hunter Strickland’s brawl.

Strickland came up with the San Francisco Giants in 2014 as a hard-throwing right hander. Five years earlier, you could have used both hands to count the number of MLB players that threw as hard as Strickland and had room to spare. In 2014, he was one of several relievers throughout the league that could push 100 mph on the radar gun.

In Game 1 of the 2014 NLDS against the Washington Nationals, Harper came to the plate against Strickland. Strickland threw a 97 mph fastball right into Harper’s happy zone and the ball went a very long way.

Three games later, the two met again. Like in Game 1, Strickland threw a 97 mph heater and it produced a strikingly similar result.

So, what happened? Well, Harper has a lot of power, of course. But Strickland supplied a lot of it for him. The game is now filled with pitchers who throw as hard if not harder than Strickland. Those pitches don’t always hit the corner and the misses don’t always miss the strike zone by several inches. Occasionally, those misses travel right into the hot zone for a hitter and when that happens, the ball can go a long way. Still, hitting a 97 mph fastball is not easy. So, more pitchers throwing 97 with less than ideal command will lead to homers, it will also lead to strikeouts.

Really, if we had to circle one thing as the primary cause of a power explosion, the players would be it.

The balls and the bats are certainly relevant factors. But it’s hard to imagine either of them being a greater factor than a league-wide shift in the kind of players that teams pursue.