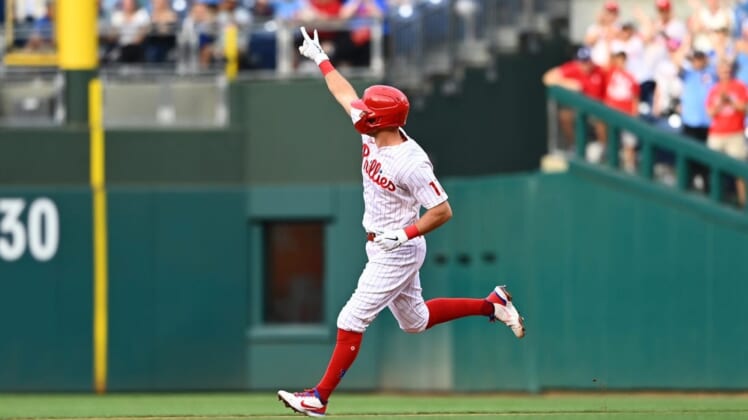 Rhys Hoskins homered twice, Kyle Schwarber hit a three-run home run and the host Philadelphia Phillies defeated the Arizona Diamondbacks 7-5 on Friday for their eighth win in a row.

Corey Knebel threw a scoreless ninth inning for his 11th save in 14 opportunities.

Daulton Varsho led the Diamondbacks with a home run, a double, a single and three RBIs. Josh Rojas added a two-run double.

Diamondbacks starter Zac Gallen (4-2) lasted only 1 2/3 innings and allowed seven hits and six runs, four earned, to go along with two strikeouts and one walk.

The Phillies went ahead 1-0 in the first inning when Hoskins launched a homer to center field.

In the second, the Phillies took a 2-0 advantage when Garrett Stubbs reached on an error as Alec Bohm scored. Schwarber followed with a mammoth three-run homer for a 5-0 lead. Gregorius added an RBI double in the frame for a six-run advantage.

The Diamondbacks managed only one hit through the first five innings, a third-inning single by Alek Thomas.

Varsho crushed a homer to right with one out in the sixth to close Arizona within 6-1.

The Diamondbacks loaded the bases with one out in the seventh and Varsho hit a two-run double off the wall in right to cut the deficit to three. Rojas then ripped a two-run double to left to close the gap to 6-5.

The Phillies got an insurance run in the seventh when Hoskins hit his second solo homer, this time off Sean Poppen. It was Hoskins’ 10th career multi-homer game, but his first this season.