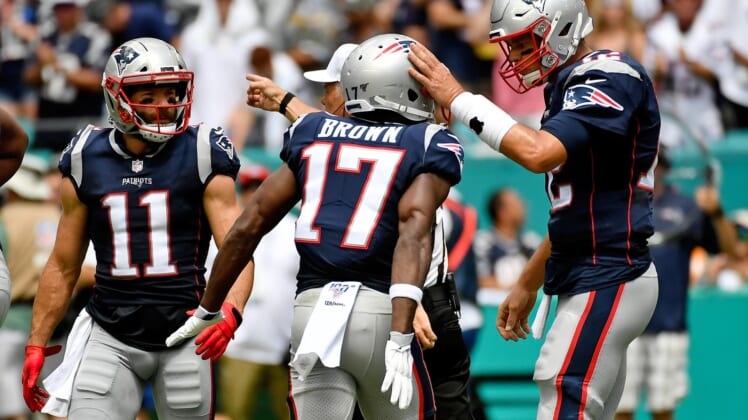 Tom Brady found the perfect situation with the Tampa Bay Buccaneers. Already supported with arguably the best receiver duo in the NFL, Brady could now potentially be looking to make it even stronger. After only playing with Antonio Brown for a short time with the New England Patriots, Brady reportedly wants Brown to join forces with him on his new team.

According to NFL Network’s Tom Pelisserio, NFL teams that pursued Brady were led to believe that the future Hall of Famer specifically wanted Brown to come with him on any team he signed with.

It’s especially notable given the Buccaneers were reportedly willing to give Brady a voice in building the roster. While Tampa Bay is loaded at receiver with stars Chris Godwin and Mike Evans, Brady already has an existing relationship with Brown. If the Buccaneers signed Brown, he could help Brady settle in with his new surroundings with a receiver he already trusts.

While the possibility is exciting on paper, it comes with significant complications. Even with Brown starting to take responsibility for his off-field troubles, the NFL’s investigation into multiple sexual assault allegations against Brown is ongoing. He could also face additional discipline from the league after an arrest warrant was issued against him in January on charges of burglary and battery at his home.

It’s also hard to know if head coach Bruce Arians would even be open to bringing Brown into the locker room. The 67-year-old coach wasn’t shy about hiding his frustrations when players made mistakes on the field in 2019. We can’t even fathom how he’d react to Brown’s drama away from it.