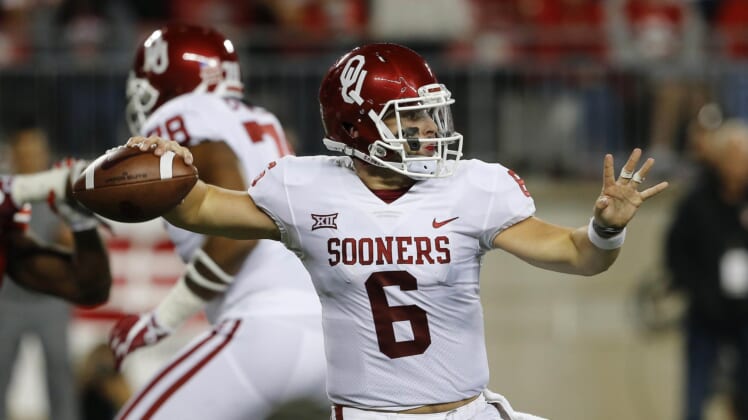 As Senior Bowl week is upon us, quarterback Baker Mayfield has one very prominent supporter. Charles Robinson of Yahoo Sports is reporting that New Orleans Saints coach Sean Payton is high on the Oklahoma product.

Little #SeniorBowl scuttlebutt. Have heard for about a month now that #Saints coach Sean Payton is squarely in the camp of Baker Mayfield believers. That’s not going away.

This is interesting. It’s even more interesting when we remember that, while he wants to return to New Orleans, Brees is a free agent unless the Saints re-sign him. Additionally, Payton won’t discuss Brees’ status.

However, it sure seems like Payton is interested in having both guys on the roster in 2018, if he could swing it.

Some added context on #Saints grooming next rookie QB. Brees is super competitive even in meetings and next kid has to keep up in 2018. The last rookie QB got steamrolled mentally and never recovered. Payton likes the wicked competitive streak Baker Mayfield brings to everything.

Brees is coming off of a stellar season. He completed 72 percent of his passes for 4,334 yards with 23 touchdowns and eight interceptions.

That said, Brees is also 39. So, even if he does return to New Orleans in 2018, Mayfield can certainly be drafted as the quarterback of the future, as well.

Mayfield completed 70.5 percent of his passes for the Sooners in 2017. He added 4,627 yards and 43 touchdowns against six picks en route to the Heisman Trophy.