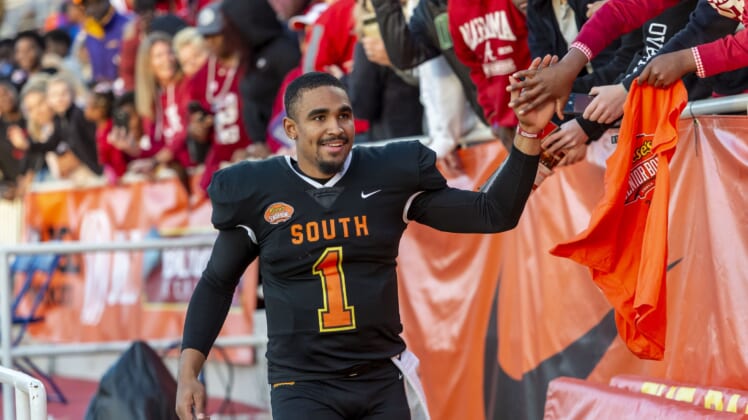 The Las Vegas Raiders have been connected to nearly every upcoming free-agent quarterback on the market. Now it appears head coach Jon Gruden could have his eyes set on drafting a quarterback in the first round of the 2020 NFL Draft.

There is reportedly growing buzz in the NFL that the Raiders may use their second first-round selection (No. 19 overall) to draft a quarterback, per The Athletic’s Vic Tafur. While former Utah State quarterback Jordan Love could draw consideration, the Raiders are reportedly very high on Jalen Hurts and could trade down to select him later in the first round.

The former Alabama Crimson Tide and Oklahoma Sooners star gathered a lot of buzz during the Senior Bowl with a stellar performance throughout the week. Once considered a likely third-round selection, Hurts elevated his draft stock in front of NFL coaches and kept impressing with a dominant showing at the NFL Combine.

While the latest mock draft has Hurts falling just outside the first round, he is viewed as one of the most underrated prospects in the 2020 NFL Draft. If the Raiders can move down from the No. 19 selection to pick up additional draft capital and still get Hurts, he could be their quarterback of the future.

Whether it’s Love or Hurts, the Raiders are clearly thinking about a long-term replacement for Derek Carr. Even if he remains in the team’s short-term plans, Gruden seems to be preparing to find his own quarterback to mentor and build his offense around.