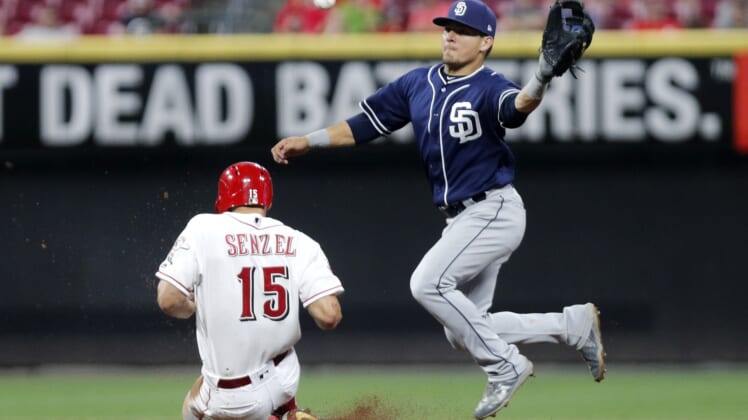 The San Diego Padres and Boston Red Sox have had plenty of trade discussions this offseason. Now, both teams could reportedly by eyeing a blockbuster three-team trade with the Cincinnati Reds.

According to The Athletic’s Dennis Lin, the Padres have discussed a three-team deal that would send outfielder Wil Myers and prospects to the Red Sox with Reds outfielder Nick Senzel going to San Diego. It’s not known what Cincinnati would receive in exchange for dealing one of its core pieces.

When the Padres and Red Sox discussed a Mookie Betts’ trade in January, the proposed deal would have sent Myers’ contract and prospects to Boston. While Betts is now in Los Angeles, both San Diego and Boston are still interested in making a deal happen.

The Red Sox unloaded significant payroll by trading Betts and David Price. If a deal came to fruition, they would agree to take on a significant portion of the $68.5 million Myers is owed over the next three years and could reportedly land catching prospect Luis Campusano in return.

The Padres have loved Senzel’s skills for years and could view him as a solution in center field or even at second base. The 24-year-old suffered a torn labrum near the end of the 2019 season, but he is on track for Opening Day and was ranked as MLB.com’s No. 6 overall prospect after the 2018 season.

It remains unlikely that a deal comes together, given the Reds remain high on Senzel and aim to contend in 2020. Even if an agreement is tentatively reached, recent history with the Red Sox shows it doesn’t mean a deal will become official.