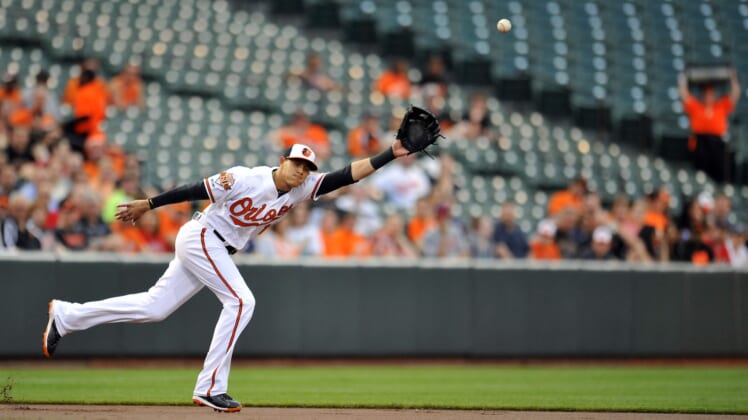 Seen as a cornerstone for potential contention with the Baltimore Orioles over the next several seasons, three-time All-Star third baseman Manny Machado is not necessarily on the trade block.

But according to Jon Heyman of FanRag Sports, this has not stopped multiple teams from calling the Birds about Machado.

“The Baltimore Orioles have received a couple calls of inquiry on superstar third baseman Manny Machado, and while the Orioles are not shopping — and love — Machado, word is that would be willing to listen on any player – even their best player,” Heyman reported Thursday.

Despite what they will tell you publicly, teams tend to be willing to take calls about every player. This doesn’t mean the Orioles are actively shopping Machado. Instead, it’s all about due diligence.

Machado, 25, is coming off a 2017 campaign that saw him hit .259 with 33 homers and 95 RBI while boasting a substandard .310 OBP. The youngster is arbitration eligible and won’t be set to hit the open market until 2019. He earned a relatively cheap $11.5 million this past season.

Heyman goes on to note that the New York Yankees, St. Louis Cardinals and San Francisco Giants could be interested suitors.

Based on his previous success, age and contract, it’s highly likely that Baltimore would demand a deal similar to the asking price from the Marlins for Giancarlo Stanton to even consider moving Machado.