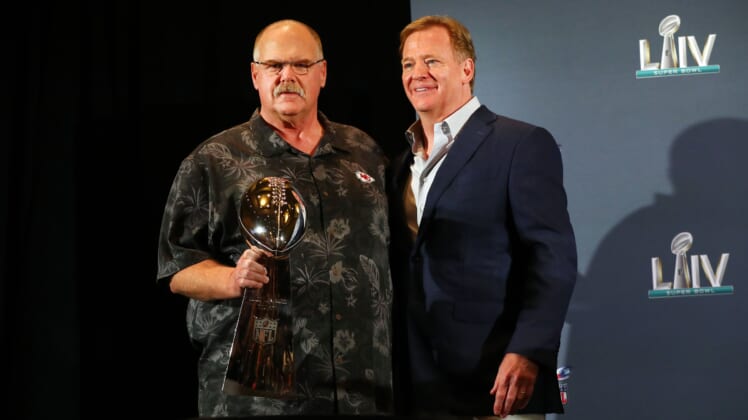 The 2020 NFL season is just a few months away with teams starting to prepare for training camp. At a time when the focus should entirely be on getting ready for a grueling football season, coaches and general managers are dealing with concern and uncertainty.

Coaches, general managers concerned over NFL’s lack of a plan for 2020 season

The NFL has publicly kept expressing confidence that the 2020 regular season will go on as scheduled. While the league has released COVID-19 protocols for training camp and strict social distancing guidelines, coaches and general managers reportedly are concerned by a lack of information for how the NFL intends to operate during the pandemic.

According to ProFootballTalk’s Mike Florio, multiple coaches and team executives feel the league’s communication regarding things like roster sizes, testing protocols and practice formats has been virtually nonexistent.

We saw in April that the NFL stuck by its commitment to hold the 2020 NFL Draft and the virtual event proved to be incredibly successful. Unfortunately, as one coach described, it might have led to the NFL and commissioner Roger Goodell believing they could keep sticking to the schedule despite the ongoing health crisis.

“The worst thing that happened, was the draft was a success,” a coach said, via ProFootballTalk. “So the Commissioner thinks he’ll be right on moving ahead toward the season.”

As the NFL largely remains quiet, the NFL Players Association has made the most noise publicly. The NFLPA has urged the NFL to cut down roster sizes for training camp, limit 11-on-11 practices and requested the league eliminate the entire preseason.

While all of those measures would help better ensure player safety, it would also result in coaches having fewer practices to prepare players for a 16-game season and general managers would have fewer players to count on.

Given the NFL’s struggles to provide teams with clear plans for the 2020 season, it’s no surprise that many clubs are feeling uneasy about playing this season. Pair that with a similar sentiment held by players and it becomes clear why the 2020 NFL season might be in jeopardy.