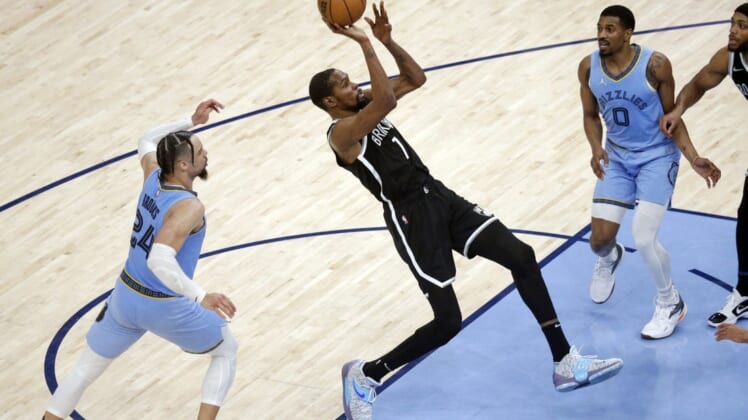 The pairing could be a reality if the Memphis Grizzlies are able to turn their reported interest in the Brooklyn Nets star into an official trade.

The Athletic reported Monday that Durant’s latest, and perhaps strongest, suitor is Memphis, which can underpin any offer with multiple draft picks.

Until Monday, the Boston Celtics had been rumored to be the frontrunner for Durant with the Philadelphia 76ers reportedly interested and many others on the “monitoring with interest” list.

Per the report, the Grizzlies aren’t inclined to part with Jaren Jackson Jr. or Desmond Bane to acquire Durant but would be open to swapping any and all of their draft picks. Memphis also owns a protected first-round pick from the Golden State Warriors in 2024.

Establishing the appropriate value for Durant, beyond his four-year, $198 million extension that begins this season, has been a challenge, according to The Athletic.

The Nets are reportedly asking for more than the Minnesota Timberwolves gave up for Rudy Gobert, sending five players and five draft picks to the Utah Jazz.

Durant, 33, demanded a trade on the eve of free agency and doubled down this month with a request to ownership that the Nets make a change at general manager and head coach or set Durant free.

Nets owner Joe Tsai subsequently appeared to back his staff over the player. “Our front office and coaching staff have my support,” Tsai said. “We will make decisions in the best interest of the Brooklyn Nets.”

The Toronto Raptors, Miami Heat and Celtics were reportedly the most serious players in the Durant sweepstakes in July.

A two-time NBA Finals MVP and four-time scoring champion, Durant joined Brooklyn as a free agent in 2019 alongside Kyrie Irving. Durant averaged 29.9 points, 7.4 rebounds and 6.4 assists in 55 games this past season with the Nets, who traded fellow All-Star James Harden to the Philadelphia 76ers in a blockbuster deal involving Ben Simmons.

Irving, a seven-time All-Star, picked up his $36.5 million option, though the Nets are said to be willing to listen to trade offers.