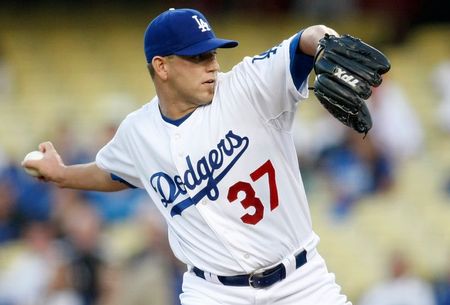 Former major league pitcher Charlie Haeger, who police were seeking in connection with the shooting death of his ex-girlfriend, was found dead of a self-inflicted gunshot wound in Arizona, multiple outlets reported Saturday night.

According to the reports, police found Haeger’s body on a trail in the Grand Canyon on Saturday afternoon, a day after police believe the 37-year-old shot to death 34-year-old Danielle Breed in a house in Scottsdale, Ariz.

Police said that Breed’s roommate returned home Friday afternoon and heard shots coming from Breed’s room as he got there, according to the Arizona Republic. Moments later, Haeger came out of the room with a gun in his hand and pointed the gun at the roommate. The roommate reportedly was able to escape out the back of the house and call 911.

When police arrived at the residence just before 7 p.m., they found Breed dead in her bed, according to Yahoo Sports.

Breed owned a bar in Scottsdale, the Republic reported. The paper also reported that police found Haeger’s car abandoned in Flagstaff, Ariz., on Saturday, as well.

Haeger spend five seasons in the majors, from 2006-10. He spent his first two seasons with the Chicago White Sox before San Diego claimed him off waivers. After a season with the Padres, Haeger signed as a free agent with the Los Angeles Dodgers, with whom he pitched two seasons.

He also later signed with Seattle and Boston, but never made it to those organization’s MLB club.

The Chicago Cubs named Haeger the pitching coach of their Double-A affiliate in Knoxville, Tenn.