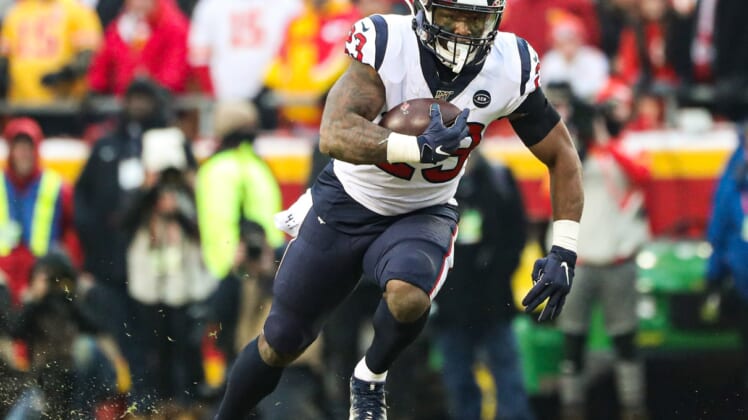 The Philadelphia Eagles have been busy this offseason upgrading their offense and defense, but a pressing need remains at running back behind Miles Sanders. Fortunately, the Eagles might have their sights set on the perfect runner to pair with Sanders.

According to NFL insider Adam Caplan, on the latest Inside the Birds podcast, the Eagles are hoping to sign a veteran running and the organization has its eye on Carlos Hyde. While no deal is close, the Eagles are reportedly targeting the former Houston Texans running back coming off a 1,000-yard season.

Hyde was traded to the Texans just before the 2019 season. On the verge of being cut by the Kansas City Chiefs, a change of scenery changed everything for the former second-round pick. He quickly took over as Houston’s top running back and rushed for 1,070 yards, the first 1,000-yard season in his career.

The 29-year-old running back held up well despite running behind an inconsistent offensive line. He averaged 4.4 yards per carry this past season and is just a few years removed from catching 59 passes in 2017 with the San Francisco 49ers.

Hyde likely remains a free agent due to his age and a lack of explosiveness. However, he could potentially be a Jordan Howard replacement in Philadelphia’s offense. While the Eagles clearly believe in Sanders, a second-round pick in 2019, head coach Doug Pederson might want to lighten the workload for his top running back next season.