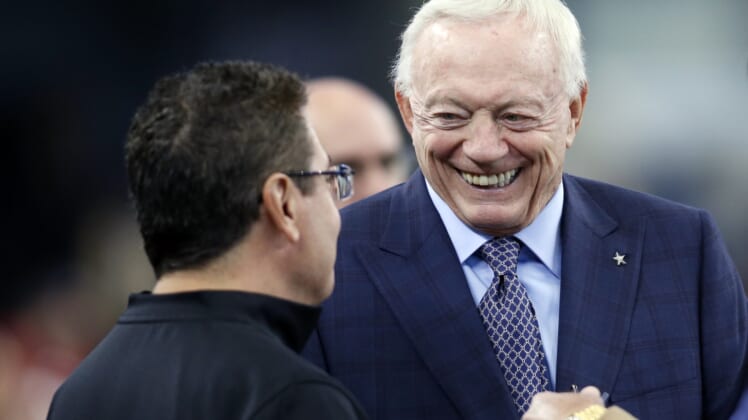 The Dallas Cowboys head into the 2020 NFL Draft with obvious needs along the offensive line and in their secondary. A team that is known for making big moves each year, owner Jerry Jones could be eyeing another big draft-day trade.

An NFL executive told NBC Sports’ Peter King that the Cowboys could target a trade down from the No. 17 overall selection on draft day. Currently holding three top-100 picks in the 2020 NFL Draft, a deal would allow the Cowboys to acquire another top-100 selection and they could still land the player they reportedly love.

The loss of Pro Bowl center Travis Frederick, who retired this offseason for medical reasons, created a massive hole along the interior offensive line. The Cowboys could address it early during the 2020 NFL Draft and reportedly love Michigan center Cesar Ruiz.

Viewed as the top interior lineman in the draft class, Ruiz is viewed as a plug-and-play center who could fill in immediately for the Cowboys in a clear area of need. He is considered a mauler with his blocking with the athleticism and tenacity to become a Pro Bowl-caliber player at the position.

If the Cowboys aren’t able to trade down, taking Ruiz with a top-20 selection might be viewed as a reach. But Jones could also use the No. 17 pick to find a shutdown corner to replace Byron Jones and Florida cornerback CJ Henderson could be an option if he’s available.

While plenty of uncertainty remains with the 2020 NFL Draft approaching, it’s clear that Jones and the Cowboys have plenty of cards up their sleeve.