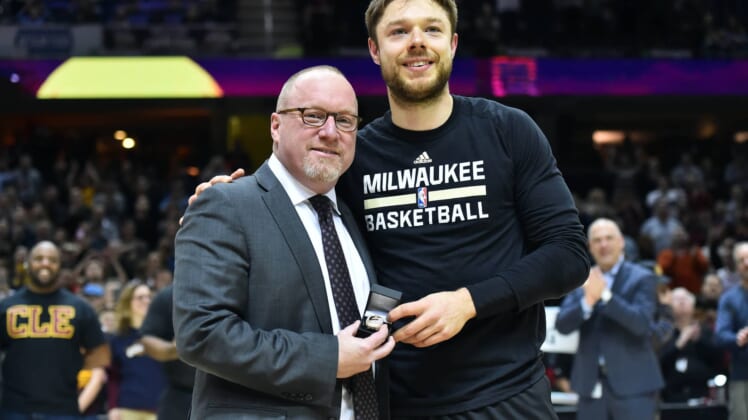 The entire NBA world knows that the Phoenix Suns are going to have to trade Eric Bledsoe, a malcontent guard who has made it known he doesn’t want to remain in Phoenix.

Realistically, this should lower the bounty the Suns receive in any potential trade. But don’t tell that to the brass in Phoenix, who reportedly demanded this absurd package from the New York Knicks for Bledsoe.

In talks with multiple teams, it appears that the Milwaukee Bucks have had substantial conversations with Phoenix for Bledsoe. Though, the two seem to be pretty far apart on any compensation heading back to the desert.

According to Gery Woelfel of the Racine Journal Times, the Bucks are dangling Matthew Dellavedova in talks with Phoenix for the guard.

Meanwhile, the Suns have something else in mind here.

“The scuttlebutt is, if the Suns got their way, they’d acquire (Malcolm) Brogdon and either veteran big man John Henson or former Suns forward Mirza Teletovic,” Woelfel reported.

That’s a whole heck of a lot to ask for someone who is squarely on the block, a fact that every team around the Association knows.

As the insider noted, Brogdon is coming off a Rookie of the Year performance in Milwaukee. He’s three years younger than Bledsoe and comes in a whole heck of a lot cheaper. Trading him for Bledsoe straight up doesn’t seem to make much sense here. Addd in the asking price of John Henson or Mirza Teletovic, and that’s magnified further.

The Suns are likely going to have to lower their asking price if they hope to move Bledsoe. The split between them and Milwaukee here magnifies this to a T.