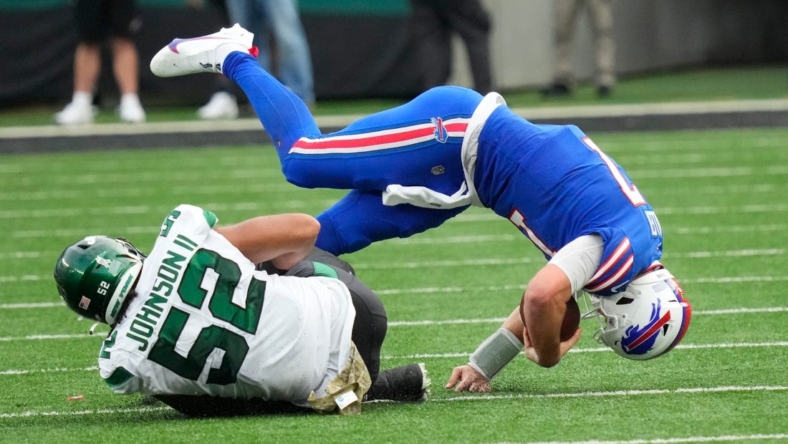 The goal for Allen is to “manage” the injury without missing a game, per the report, including Week 10 against the Minnesota Vikings.

The Bills practice Wednesday, when coach Sean McDermott could discuss the short-term plan at the position. Veteran Case Keenum would be in line to start against one of his former teams in Minnesota if Allen rests this week.

Allen said Sunday night he felt “slight pain” in what he described as a bruise on his throwing elbow, an injury incurred in the Bills’ loss to the New York Jets.

McDermott said Monday afternoon that a clearer picture of the injury would be gleaned by the Bills’ medical team in the next 24 hours, creating some doubt about Allen’s availability.

Allen had a sprained UCL in his right elbow in 2018 and is believed to be dealing with a similar injury.

In addition to four interceptions, Allen has been sacked seven times the past two games.

After a strip-sack by Jets edge rusher Bryce Huff in the final minute of Sunday’s game, Allen was flexing his right wrist and opening and closing a clinched fist.

Buffalo recovered the fumble and Allen remained on the field. Two plays later he let go of a dart from his own 10-yard line that carried 70 yards in the air but resulted in an incompletion to Gabe Davis.

“It’s tough to win in this league when you’re playing a good team and your quarterback plays like —,” Allen said after the game.

Allen scored two first-half rushing touchdowns to put the Bills up 14-3. He completed 18 of 34 passes for 205 yards and two interceptions and fumbled twice, but the Bills recovered.