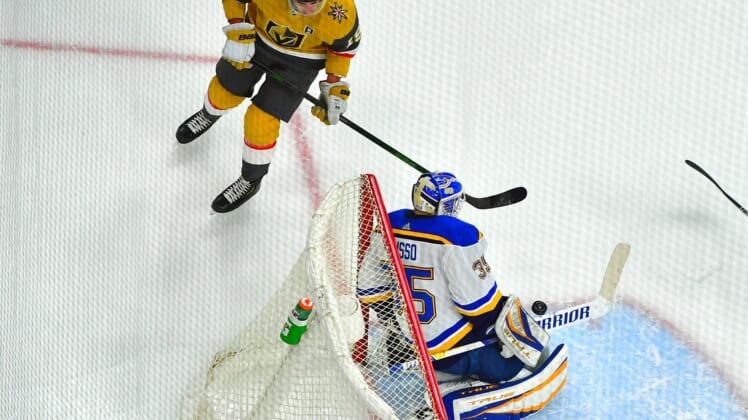 Reilly Smith scored the first hat trick of his career to lead the Vegas Golden Knights to a 4-1 victory over the St. Louis Blues on Saturday night in Las Vegas.

The Golden Knights, who improved to 8-0-1 in the second half of back-to-backs, remained four points ahead of second-place Colorado in the battle for first place in the West Division. The two teams meet for the final time in the regular season on Monday night in Las Vegas.

Marc-Andre Fleury made 20 saves to extend his personal winning streak to eight games.

Colton Parayko scored a goal and Ville Husso finished with 25 saves for St. Louis (24-20-9, 57 points), which had an eight-game point streak snapped.

The Blues, who clinched fourth place and the final playoff spot in the West with a point in a 4-3 overtime loss in the front end of the back-to-back on Friday, came out sluggish and didn’t manage a shot on goal in the first 15:56 as Vegas built an early 2-0 lead.

Smith made it 1-0 when he backhanded in a rebound of his own shot that caromed in off the back of the skate of Jaden Schwartz. Stephenson increased the lead to 2-0 just 66 seconds later with a short-handed goal, one-timing a pass from Pietrangelo from the right circle for his 14th goal of the season.

The Blues, who managed just eight shots on goal over the first two periods, cut it to 2-1 at the 19:23 mark of the second period when Parayko stole the puck from Shea Theodore near the end boards and then quickly beat Fleury with a backhand for his second goal of the season.

Vegas increased its lead to 3-1 early in the third period on a power-play goal by Smith, who jammed in a rebound of his own shot. The Blues pulled Husso for an extra attacker with 2:00 left and Smith completed his hat trick with an empty-netter with 47.9 seconds to go, his fifth goal in three games and 14th of the season.