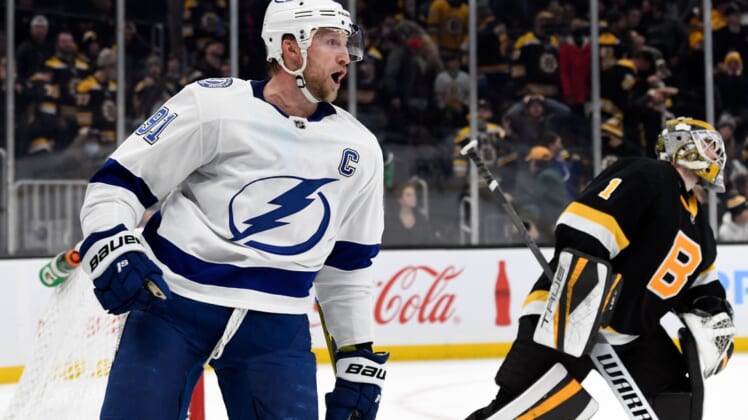 The Tampa Bay Lightning are starting to look like the club that has won consecutive Stanley Cups.

With the return of the dynamic Nikita Kucherov in their last outing, the Lightning got closer to full strength as they attempt to become the first NHL team to win as many as three straight Cups since the New York Islanders won four in a row from 1979-80 to 1982-83.

Tampa Bay will try to improve on its fine home record Saturday night by hosting the Boston Bruins for the first time this season in the clubs’ second meeting.

The match will close a two-game homestand before Tampa Bay embarks for Monday’s game against the New Jersey Devils.

In Tuesday’s victory, the Atlantic Division-leading Lightning improved their home point streak to nine games (8-0-1) and moved to 12-1-2 in the past 15 games on their ice.

Andrei Vasilevskiy came within 4:06 of crafting his third shutout thus far and increased his league-best mark to 19 wins among goaltenders.

But Thursday night belonged to Kucherov, who suited up for the first time after missing 32 games for head coach Jon Cooper’s squad before it efficiently dispatched of the Calgary Flames 4-1.

Out since suffering a lower-body injury on Oct. 16 against the Capitals in Washington, Kucherov did not score in his first game back but showed there was very little rust coating his game.

He delivered two primary assists — the first on a beautiful pass to Brayden Point, the second a spinner to Ondrej Palat — to boost Tampa Bay to a comfortable 3-0 margin over Calgary midway through the final period.

“It was nice to be back, that’s for sure,” said Kucherov. “It’s never easy [coming back]. It’s getting tougher and tougher.”

The point-producing right wing missed all of the 2020-21 regular season following hip surgery.

However, he returned to lead the Lightning’s playoff push by totaling eight goals and a postseason-best 24 assists as the club clinched its second straight title.

The Lightning won the season’s first matchup against the Bruins in Boston on Dec. 4, succeeding in overtime when Steven Stamkos skated in on a two-on-one with Palat and blistered the game winner from the right circle.

The Bruins will be trying to put that loss behind them and their most recent one, too — Thursday’s 3-2 home defeat against the struggling Minnesota Wild.

“I don’t think either team had a ton at 5-on-5 [play]. It was just one of those games where there was zero flow,” said Boston coach Bruce Cassidy. “At the end of the day, you’ve got to find a way at 5-on-5 against good teams.”

Charlie McAvoy (lower body) missed his second game Thursday — ironically, the first was at home against the Lightning — but Cassidy expects the defenseman back in Tampa.

The Bruins will then go back north to visit the Capitals on Monday night.

In his effort to rejoin Boston, goalie Tuukka Rask had his AHL stint with affiliate Providence delayed at least a week after the league Thursday postponed the team’s games against the Lehigh Valley Phantoms because of the opponent’s COVID issues.