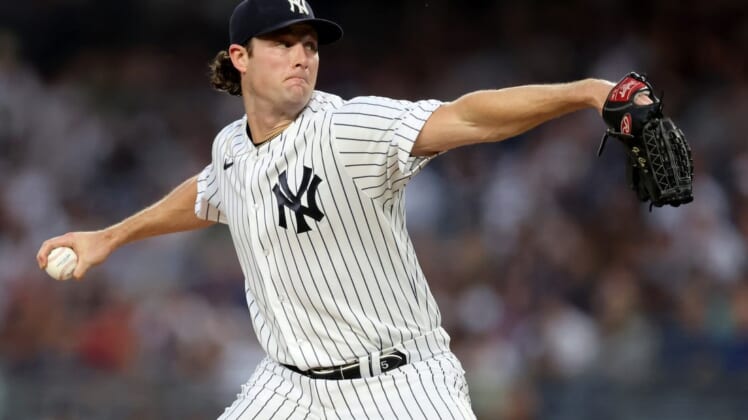 Jonathan India hit a go-ahead, two-run single in a four-run ninth inning as the visiting Cincinnati Reds rallied for a 4-3 victory over the New York Yankees on Tuesday.

The Yankees fell to 48-1 when leading after eight when Clay Holmes (4-1) did not retire any of the five hitters he faced. Holmes loaded the bases by walking Tommy Pham, allowing a single to Joey Votto and plunking Tyler Stephenson.

Tyler Naquin followed with an RBI single, and Holmes heard boos after hitting Farmer with a pitch to force in another run.

Wandy Peralta took over on the mound got two Reds batters to hit grounders that resulted in forceouts at the plate. Peralta was one strike away from a save when India lined an 0-2 pitch into center field.

Before pulling out their season-high fifth straight win, the Reds were held to four hits in seven scoreless innings against Gerrit Cole. The right-hander struck out 11 batters for his fifth double-digit strikeout game this year, and he walked one.

The Yankees have lost three straight for the second time this season after blowing leads in consecutive losses at Boston over the weekend.

Michael King tossed a perfect eighth inning for New York before Holmes fell to 16-for-18 on save opportunities.

Anthony Rizzo hit a two-run single as the Yankees went ahead three batters in against Cincinnati rookie Graham Ashcraft. Josh Donaldson added an RBI single in the third, and Gleyber Torres had three hits and reached four times.

The Yankees lost Aaron Hicks in the third inning due to a right shin contusion, but precautionary X-rays were negative. Hicks was injured when he fouled a ball off his lower leg, and he was helped off the field by a trainer.

Reiver Sanmartin (2-4) pitched a scoreless eighth inning for the win. Alexis Diaz walked DJ LeMahieu with one out in the ninth, but Torres grounded into a game-ending double play to seal Diaz’s third save.