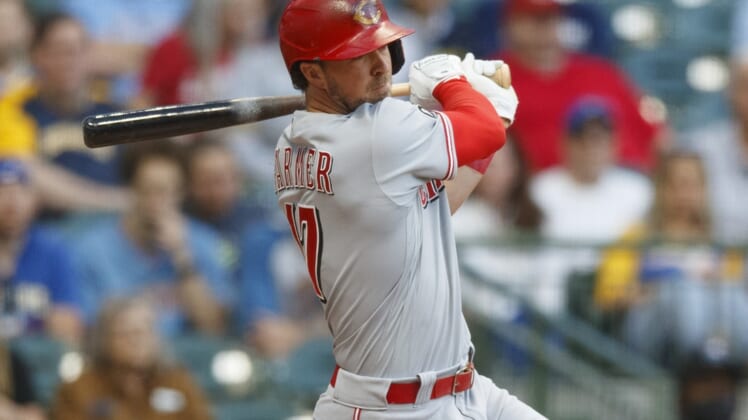 Brad Boxberger hit a pair of batters and Kyle Farmer drove in a run with a sacrifice fly as the visiting Cincinnati Reds edged the Milwaukee Brewers 2-1 in 10 innings Tuesday night for their fifth straight win.

Lucas Sims (4-1) pitched a scoreless ninth for the win, and Amir Garrett recorded the final out with the tying and winning runs on base for his third save as the Reds won for the 12th time in 15 games.

The Brewers lost consecutive games for the first time since May 25-26. The Reds collected only two hits over 10 innings but improved to a major league-best 8-2 in extra innings.

Cincinnati’s only baserunner over the first five innings was Kyle Farmer, who punched a one-out hit to right in the third. Following a Castillo sacrifice that moved Farmer into scoring position, Jonathan India struck out swinging to end the threat.

Through four innings, Christian Yelich was Milwaukee’s only baserunner, working a walk off Castillo in the first inning and reaching in the fourth when Eugenio Suarez bobbled a transfer of the ball from glove to hand.

Omar Narvaez collected the first hit off Castillo when he drove a single to right-center to open the fifth. But Castillo induced Willy Adames to ground into a 6-4-3 double play.

Anderson was pulled after seven innings, allowing only the Farmer single and a walk to India in the sixth while striking out a season-high nine.

Castillo’s night was also done after seven, allowing three hits while walking three and striking out seven. Brad Brach pitched a perfect eighth before Sims came on to pitch the ninth.

Boxberger (2-2), who had not allowed a run in his last 12 appearances, had no control or command in the tenth, hitting Tyler Stephenson and later Eugenio Suarez with the bases loaded and none out for the first run of the night.

Farmer then lifted a sacrifice fly to right score the second run as the Reds scored the game-winning runs without benefit of a hit.

After Heath Hembree retired the first two batters of the tenth, Daniel Robertson blooped a two-out single to right to score Narvaez to cut Cincinnati’s lead to 2-1. Right-fielder Nick Castellanos over-ran the ball for an error, allowing Robertson to advance into scoring position.

Urias worked a walk off Hembree, before Garrett was called into the game and struck out pinch-hitter Tim Lopes for the final out.