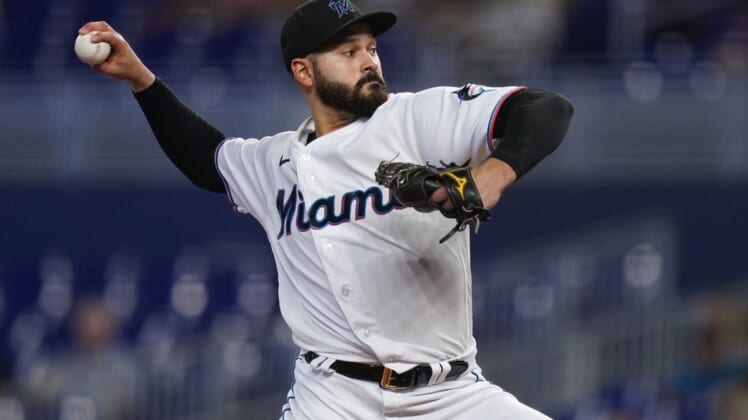 The Cincinnati Reds will look to continue their home dominance of the visiting Miami Marlins when the clubs meet Tuesday in the second contest of a four-game series.

With their 11-2 win on Monday, the Reds have routed the Marlins 53-12 in eight straight home wins. Miami hasn’t won in Cincinnati since 2018 and has dropped 12 of its past 15 overall to the Reds.

In a month when they play 21 of 26 games at home, the Reds have won nine of their first 15 contests in Cincinnati, with six games left on the current homestand.

In his first start back from the All-Star break, Lopez allowed five runs on five hits over five innings on Thursday and took an 8-0 loss against the Texas Rangers.

The Reds will counter with rookie right-hander Hunter Greene (3-11, 5.78 ERA), who will be making his 19th major league start and his first after the All-Star break.

Greene is hoping to use the second half to turn around a troubling trend, as he leads the majors in home runs allowed with 23. Since 1900, only two rookie pitchers have led the National League in home runs, Ed Donnelly (11 homers) of the 1912 Boston Braves and Bill Voiselle (31) of the 1944 New York Giants.

In his past five starts, Greene went 0-4 with a 7.11 ERA and six homers allowed.

The Reds (16) and Marlins (15) are the top two clubs in the majors in terms of players on the injured list.

The Marlins are hoping first baseman Garrett Cooper doesn’t join that group. Cooper was not in the lineup for the second straight game Monday after he was hit by a Wil Crowe 96 mph pitch while pinch-hitting in the eighth inning Saturday in Pittsburgh. The ball struck Cooper in the same spot where he had right wrist surgery in 2018.

“I think they’re going to do a little bit more testing (Tuesday),” Miami manager Don Mattingly said. “There’s somebody here they’re going to go see. I think the results (Sunday) were pretty good. Does that mean it’s good enough to keep him off the IL? I’m not sure about that. But I think the fact that it’s not going to be in a cast or something like that is good news.

Marlins third baseman Brian Anderson is being further evaluated in Florida after jamming the same left shoulder that forced him to miss much of 2021. Anderson sustained the latest injury diving unsuccessfully for a line drive in the sixth inning Saturday in Pittsburgh.

The Reds confirmed Monday the signing of first-round draft pick Cam Collier to a $5 million bonus, significantly more the $3,659,800 slot value for the 18th pick, where the Reds selected the 17-year-old infield prospect.

“Clearly, we had Cam valued very highly,” Reds director of amateur scouting Joe Katuska said. “We were able to move some money around to meet those expectations.”

The Reds have come to terms with all of their top 10 selections from the 2022 draft.