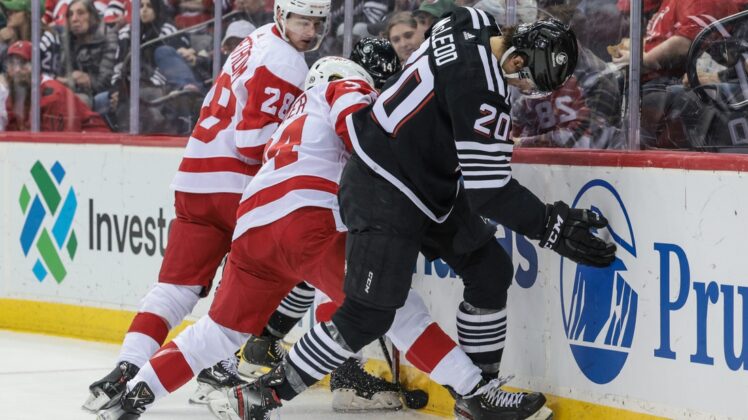 Pius Suter scored the go-ahead goal, Magnus Hellberg made 20 saves in his first NHL appearance in five years, and the Detroit Red Wings closed out their season with a 5-3 win over the host New Jersey Devils on Friday.

Hellberg had not appeared in an NHL contest since April 9, 2017, as a member of the New York Rangers. Hellberg, 31, played the last five seasons in Russia.

Rasmussen scored his 15th goal just 1:08 into the contest. He wheeled into the slot and whipped a shot past Blackwood. Oskar Sundqvist and Jake Walman picked up the assists.

Mercer scored his first goal in 19 games and 17th of the season after a Detroit turnover in its own zone. Zetterlund set up Mercer’s goal.

Seider, a top candidate for the Rookie of the Year award, put Detroit back on top at 6:30 of the second period. He rifled a shot from the point that eluded Blackwood’s glove. Sam Gagner and Rasmussen had the assists.

Foote tied it again when he notched his third goal, redirecting a Dougie Hamilton shot. Jesper Boqvist had the second assist at 15:38 of the period.

Detroit took a 3-2 lead during the first minute of the third. Bertuzzi collected his own rebound, skated behind the Devils’ net and fed Veleno for his eighth goal.

Zetterlund tied it with his third goal at 6:57. He scored from the left side off passes from Nico Hischier and Jesper Bratt.

The Wings’ next go-ahead goal wasn’t determined until a video review. A Suter shot at 10:42 trickled between Blackwood’s pads and barely crossed the goal line. Initially, the officials didn’t call it a goal and let play continue. Jakub Vrana chalked up an assist.