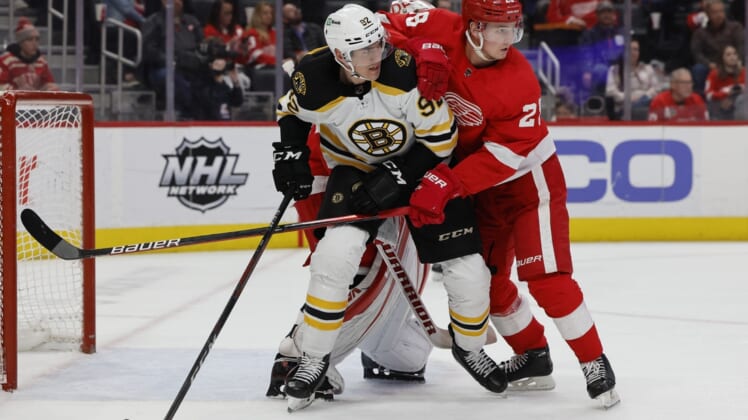 Alex Nedeljkovic made a career-high 47 saves, Jakub Vrana had a goal and an assist, and the host Detroit Red Wings snapped a six-game winless streak by downing the Boston Bruins 5-3 on Tuesday.

Patrice Bergeron had a goal and an assist for Boston. Erik Haula and Brandon Carlo had first-period goals and Jeremy Swayman made 24 saves.

The Bruins had won 10 of their previous 12 games.

David Pastrnak, who leads the Bruins with 38 goals, missed the game with an undisclosed injury.

Haula scored his 13th goal less than five minutes into the contest. He fired a shot from the right circle off a feed from Taylor Hall. Tomas Nosek picked up the second assist.

Carlo made it 2-0 with a shorthanded goal. He scored from the slot on a rebound of a Derek Forbort shot. Bergeron was also credited with an assist.

Larkin scored his 30th goal in the final minute of the period. He lifted a shot past a screened Swayman that found the upper corner of the net. Moritz Seider and Lucas Raymond had the assists.

Rasmussed tied it just short of six minutes into the second period when he collected a loose puck in front of the Bruins’ crease and slipped it past Swayman.

Zadina’s one-timer at 11:32 of the period gave Detroit a 3-2 lead. Vrana set up Zadina and Pius Suter notched the other assist.

Vrana scored on the power play at 4:08 of the third period to extend the Wings’ advantage to two goals. His shot from the left side deflected off a defenseman’s stick and over Swayman’s shoulder. Filip Hronek and Jake Walman had the assists.

Bergeron made it a one-goal game with less than three minutes remaining. Charlie McAvoy and Hall assisted on Bergeron’s 19th goal.

Gagner sealed Detroit’s win with an empty-netter. Nedeljkovic was credited with an assist.