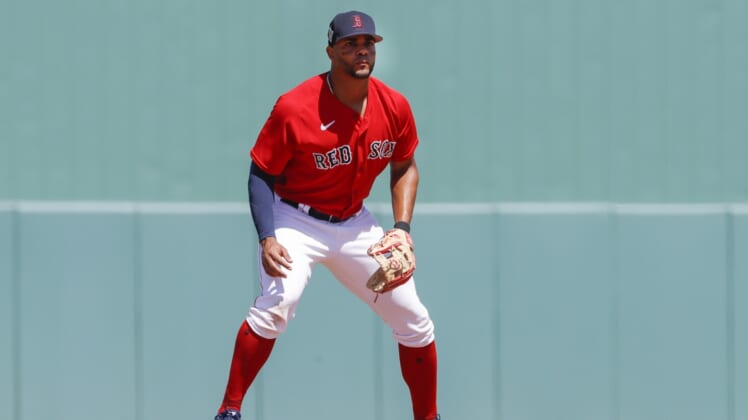 Boston Red Sox shortstop Xander Bogaerts said Thursday that he won’t reach agreement on a long-term deal with the team prior to Friday’s opening game against the host New York Yankees.

Bogaerts has said he will not negotiate during the season. He acknowledged that he did turn down an offer from Boston and countered by requesting a yearly salary on par with top-of-line shortstops.

“I can’t do nothing about it right now,” Bogaerts said in a disappointing tone with meeting with reporters. “I got a season coming up in front of me. I don’t want to put my teammates with that kind of distraction. They don’t deserve it. We had time to get something done. It didn’t work out.”

Bogaerts is entering the third season of a six-year, $120 million extension but he can opt out following the 2022 campaign.

Bogaerts didn’t divulge details about the Red Sox offer but the club certainly didn’t respond favorably to his request.

“It didn’t work out,” Bogaerts told reporters in a curt tone. “We’ll see where it goes from there.”

Bogaerts seemed happy his deal when he signed it in late March of 2019. The extension was reached 2 1/2 months after the sides agreed to a $12 million salary for the 2019 season.

But as salaries continue to rise, Bogaerts was hopeful he could land a better payday than $20 million — the salary he is slated to receive through 2026 as long a plate-appearances option in 2025 is reached.

Bogaerts, 29, is a three-time All-Star and two-time World Series champion. He has a career batting average of .290 with 141 homers and 610 RBIs in 1,114 games in nine seasons with Boston.

Interestingly, the Red Sox recently added Trevor Story, who was a two-time All-Star shortstop with the Colorado Rockies. Story received a six-year, $140 million deal and has agreed to play second base this season.

Story, 29, gives the Red Sox a shortstop option if they can’t agree to terms with Bogaerts and he opts out and becomes a free agent following the season.