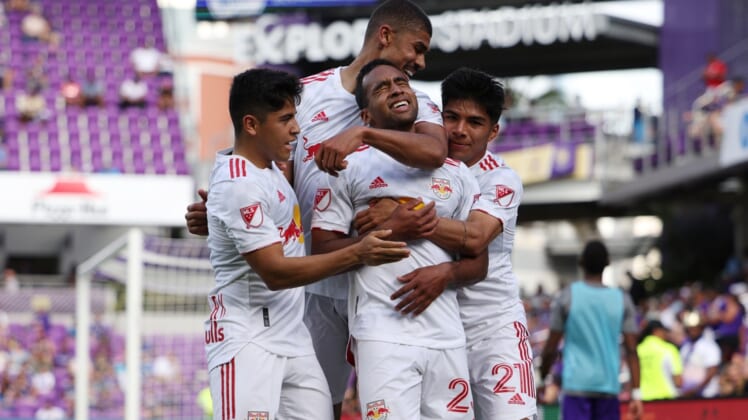 The New York Red Bulls remained perfect on the road with a 3-0 win against host Orlando City SC on Sunday.

With the victory, the Red Bulls (4-2-2, 14 points) became the third-ever MLS team to win each of their first four road matches of a season, and the first since the Los Angeles Galaxy realized the feat in 1998.

The visitors dominated the attack in the first half, attempting nine shots, of which three reached the target. Orlando struggled to generate any attack, with zero attempts in the opening 45 minutes.

New York had a chance in the 23rd minute off sustained pressure off a corner when midfielder Omir Fernandez tried to capitalize from the top right corner of the goal area but hit the outside of the net.

The Red Bulls finally connected three minutes later. Fernandez, on the right side, dished to Luquinhas at the top of the box and the attacking midfielder, with time and space, struck for his first MLS tally to give the visitors a 1-0 lead in the 26th minute.

New York came close to doubling its lead in first-half stoppage time on Ashley Fletcher’s attempt from the left side of the goal area, but he was denied by goalkeeper Pedro Gallese.

Cristian Casseres Jr. doubled the lead in the 48th minute. Gallese stopped Casseres at the top of the goal area but the ball remained loose and Casseres put his own rebound into the open net to make it 2-0 New York.

Ercan Kara had one of the best chances for the home side in the 64th minute when he was one-on-one with goalkeeper Carlos Coronel, who made the save, but Kara was flagged for offside.

Rodrigo Schlegel’s header attempt in the 72nd minute nearly got the Lions on the board but it went just wide of the left post.

Lewis Morgan extended it to 3-0 in the 88th minute from the penalty spot after video review awarded New York a penalty off a Schlegel handball in the box.

Orlando finished the match with just three attempts, none reaching the target.