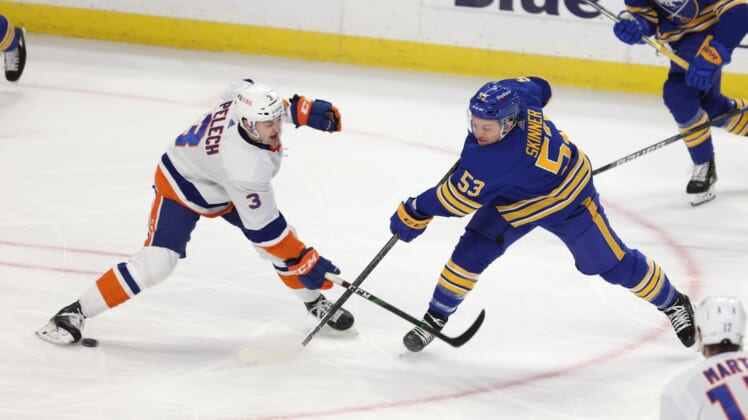 Jean-Gabriel Pageau scored a goal for the third consecutive game and Josh Bailey recorded two assists as the visiting New York Islanders extended their point streak to seven games with a 3-1 victory over the Buffalo Sabres on Monday night.

Anders Lee and Brock Nelson also scored, while Semyon Varlamov made 20 saves for the Islanders, who have won four of five amid a 4-0-3 stretch. New York’s Mathew Barzal also recorded an assist to extend his point streak to a career-high nine games.

Victor Olofsson scored the Sabres’ lone goal to extend his career-high point streak to seven games. Buffalo, which was playing its first game since Jan. 31, following a significant COVID-19 outbreak.

Buffalo had high energy at the outset and out-shot the Islanders 12-8 over the first period. However, New York struck first with 3:23 left in the opening period. Off a failed Sabres’ clearing attempt, Lee scored off a Bailey pass into the slot.

A mere 1:44 later, Pageau made it 2-0. Streaking through the neutral zone and along the far board untouched, Pageau laced a shot over the left shoulder of Linus Ullmark (26 saves), who lost in regulation for just the second time in seven starts this season.

Olofsson pulled one back for the Sabres via the power play on a one-timer from a Rasmus Dahlin pass just 1:40 into the second period. Four of Olofsson’s five goals have come with the man-advantage this season.

New York regained its two-goal advantage on a power-play goal of its own. With 10:11 to play in the second period, Nelson converted off a nifty pass from Bailey. The Islanders out-shot the Sabres 12-0 during a scoreless third period.