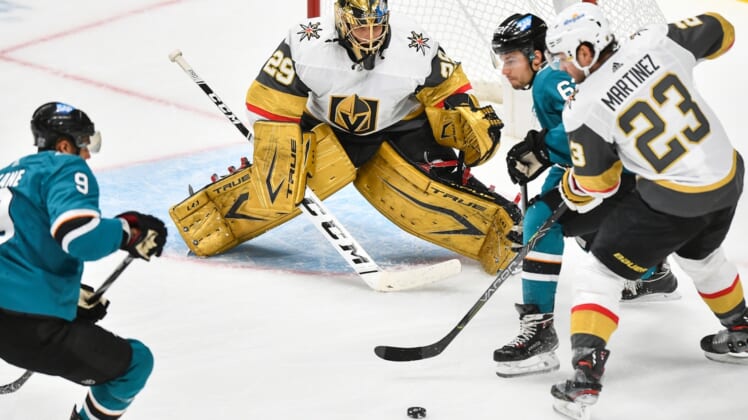 The Vegas Golden Knights scored three times on the power play as they defeated the host San Jose Sharks 3-1 on Saturday afternoon.

Jonathan Marchessault, Mark Stone, and Chandler Stephenson found the back of the net for the Golden Knights as netminder Marc-Andre Fleury tallied 24 saves. Tomas Hertl scored the lone goal for the Sharks as Martin Jones made 23 saves.

The Sharks also lost one of their own early in the second period of Saturday’s game when defenseman Radim Simek was checked from behind and then cross-checked in the ribs by Marchessault. The Czech blueliner exited the game following that shift and did not return. Marchessault was not penalized for the cross-check.

Things got a bit heated between the division rivals throughout the game, starting in the first period when Sharks’ winger Evander Kane collided at center ice with Golden Knights forward Ryan Reaves and both skaters continued chirping at each other even after they were sent to the sin bin. Tempers flared even further in the third period when Kane tussled with Reilly Smith and Marcus Sorensen had a run-in with Nicolas Hague.

Both teams had great speed going back and forth through the first half of the first period before Kane was sent to the penalty box for holding Max Pacioretty. With time on the man advantage about to expire, Marchessault punched the puck past Jones to give Vegas a 1-0 lead at the 13:13 mark in the first frame.

Stone added to his team’s tally with a power-play goal of his own at 9:56 in the second period with a backhanded shot up close that increased Vegas’ lead to 2-0. Hertl got San Jose on the board with a cross-ice snapshot to beat Fleury and cut the Golden Knights’ lead in half 2-1 with 1:21 to go in the second frame.

The Golden Knights got their third chance on the power play when Sharks’ rookie Nikolai Knyzhov went to the penalty box for holding. Alex Tuch’s shot as he was driving the net then deflected off of Stephenson’s skate and into the net to give Vegas the 3-1 lead they needed to win with 13:15 left to play.