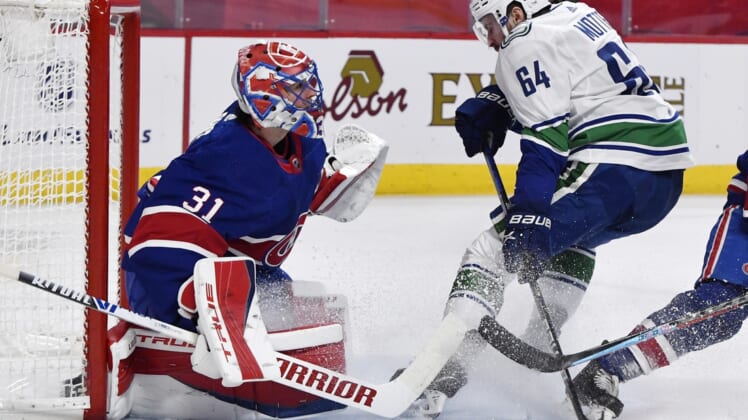 Tomas Tatar scored in regulation and had the decisive goal in the sixth round of the shootout, as the host Montreal Canadiens cooled off the sizzling Vancouver Canucks with a 5-4 victory on Saturday night.

After Montreal’s Brendan Gallagher tied the game early in the third period, it eventually prevailed when Tatar beat Vancouver’s Braden Holtby, who made 36 saves in his first start since March 2, deep into the shootout. The Canadiens, who fell 3-2 in overtime to Vancouver on Friday, won beyond regulation for the first time in 10 tries this season.

Carey Price stopped 14 of 18 shots but shined late in overtime and the shootout as Montreal improved to 2-0-2 in its last four games and won the season series 6-0-3 from the Canucks.

Vancouver had won seven of eight, but fell to 8-2-1 in March.

Down 3-2 after two periods, Vancouver turned that deficit into its own advantage less than a minute into the third. The Canucks, who tied the game at 1-1 with Jake Virtanen’s goal 22 seconds into the second period, needed the same amount of time to level the contest at 3-3.

Off a face-off win, Quinn Hughes unloaded a slap shot from the high point that Bo Horvat redirected in. It was just over a half-minute later that Vancouver took the lead when Tyler Motte whipped one in from the slot.

But right after the Canadiens won a draw in the near circle, Gallagher tied it at 4-4 with a wrister from inside the same circle at the 5:29 mark of the third.

Montreal’s Nick Suzuki opened the scoring 6:26 into this contest on the power play. The Canucks, though, tied the game within the first 30 seconds of the middle frame via Virtanen. Vancouver then went ahead 2-1 at the 8:08 mark of the second with a power-play goal on Brock Boeser’s one-timer from the near circle off Hughes’ perfect pass.

Montreal, though, evened the contest through Tatar’s blast on a delayed penalty with 6:16 left in the middle frame. The Canadiens then took a 3-2 lead when Joel Edmundson scored on a rocket from just inside the near point with 1:39 left in the second.