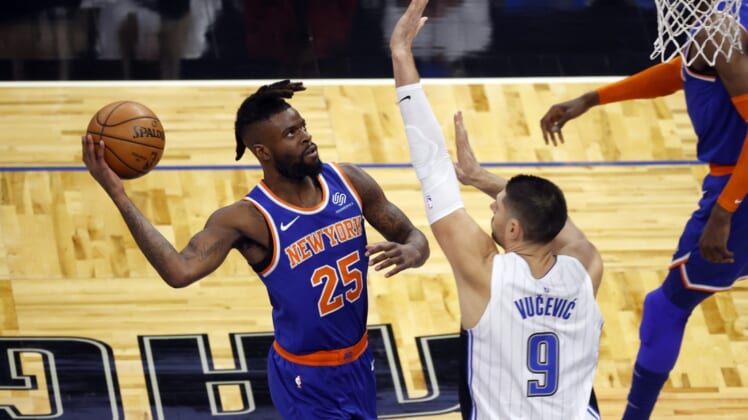 Terrence Ross came off the bench to score a season-high 30 points Wednesday night, including 13 during a decisive run spanning the third and fourth quarters, as the host Orlando Magic overcame an early double-digit deficit to beat the New York Knicks, 107-89.

The 30 points by Ross were his most since he scored 35 points for the Magic against the Miami Heat on March 4, 2020.

Nikola Vucevic (16 points, 16 rebounds) posted his 20th double-double of the season for the Magic, who rode a 22-4 run over a 10-minute span bridging the third and fourth quarters to win for just the fifth time in 21 games since Markelle Fultz suffered a season-ending knee injury Jan. 6.

Julius Randle scored 25 points with seven rebounds for the Knicks, who had their three-game winning streak snapped and failed in their chance to reach .500 this late in a season for the first time since they were 18-18 in December 2017. RJ Barrett had 15 points and Elfrid Payton added 13 points for New York, which shot just 12-for-48 from the field in the second half.

Randle sank all three of his 3-pointers during a 16-2 first-quarter run that gave the Knicks a 30-19 lead. There were 12 lead changes in the second quarter, when New York scored six of the final eight points to take a 56-53 halftime lead.

Vucevic’s jumper with 6:03 left in the third began a 9-0 run and gave the Magic the lead for good at 69-68. A jumper by Randle briefly stalled the momentum, but Vucevic drained one of his own and Ross scored five straight points to extend Orlando’s lead to 83-70 at the end of the third.

Ross scored six straight points — on a trio of free throws and a 3-pointer — to give the Magic an 89-72 lead with 8:30 left. Alec Burks hit a pair of 3-pointers during an 9-2 run by the Knicks that cut the lead to 91-81 midway through the period, but Orlando scored the next seven points and never led by fewer than 13 in the final three minutes.